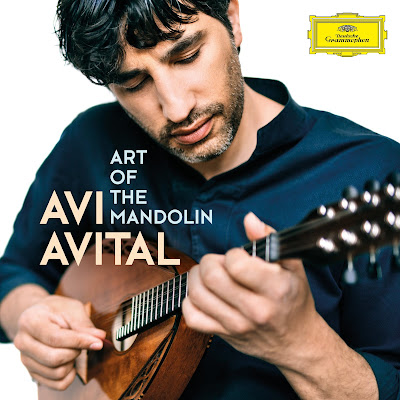 When Avi Avital first picked up a mandolin aged eight growing up in Be’er Sheva, Israel, little did he know that years later, he would become the Italian-born instrument’s international ambassador. The first mandolin soloist to become an exclusive Deutsche Grammophon artist, Avital’s latest release for

the label – Art of the Mandolin – is, in his own words, “a portrait of an instrument at once familiar and unknown”; an exploration of “the essence of the mandolin” featuring only repertoire exclusively written for the instrument spanning from the Baroque era to the present day.

mandolin youth orchestra founded by Russian-born violinist Simcha Nathanson who transcribed violin pieces especially for the instrument for his students. Continuing his studies at the Jerusalem Academy of Music and later the Conservatorio Cesare Pollini in Padua, Italy, Avital soon found out that, despite the mandolin’s rich and varied history, few classical composers had written specifically for the instrument.

only continue exploring the instrument’s classical roots but also break the mould and work across different musical periods, traditions, and genres. He has made it his mission too to reinvigorate the mandolin repertory commissioning to date more than 100 new pieces from contemporary composers including 15 mandolin concertos. His new album Art of the Mandolin – ranging from music by Vivaldi,

Paul Ben-Haim and Hans Werner Henze – is a reflection of all these concerns and a celebration of the limitlessness of the mandolin’s potentials.

instrument, Avi Avital became the first mandolin soloist nominated for a Grammy Award in 2010 for his Naxos recording of Avner Dorman’s Mandolin Concerto. An exclusive Deutsche Grammophon artist since 2013, his previous recordings for the label include solo Bach (2019); Avital meets Avital (2017) with Israeli-American jazz bassist and composer Omer Avital exploring at once their shared cultural heritage and divergent artistic paths; Vivaldi (2015); Between Worlds (2014), a survey of works inspired by folk-music traditions; and an album of his own Bach concerto transcriptions for mandolin (2012).

Stream the new album here or for a review copy/further information: