JOHN FREDERICK LEWIS, HIS DECADE IN EGYPT AND THE BEZESTEIN BAZAAR OF EL KHAN KHALIL, CAIRO

Although it was painted in his studio just outside London, the objects, characters and materials that make up the British artist’s Orientalist masterpiece are all the fruit of many years’ living ‘like a languid lotus-eater’ in Cairo’s Coptic quarter

On 4 May 1874, John Frederick Lewis (1805-1876) unveiled one of his last masterpieces to the crowds at the annual Royal Academy Summer Exhibition in London.

More than a metre high, and almost as wide, the oil painting The Bezestein Bazaar of El Khan Khalil, Cairo  depicts a bustling Egyptian souk and embodied the fashionable spirit of Orientalist art. One newspaper critic wrote that it and Lewis’s other exhibits were ‘wonderful as illustrations of Cairene life, manners, habits, costumes and architecture in a thousand minutiae’.

In reality, the scene was painted in Lewis’s studio in Surrey, just up the River Thames from London, but it was composed of visual notes made during the artist’s decade-long immersion in the Egyptian capital. 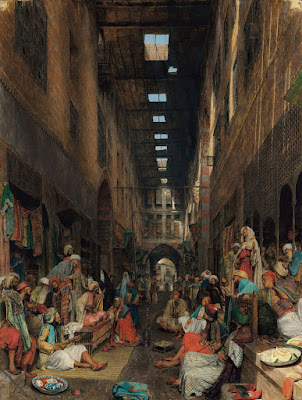 Lewis was born in London in 1804. His father was a well-to-do artist who rose to become Engraver of Drawings to Queen Victoria. As a boy, Lewis trained in the studio of the Regency society portraitist Thomas Lawrence (1769-1830), where, along with his classmate Edwin Landseer (1802-1873), he perfected the art of animal painting.

After trips to Belgium, Germany, Switzerland and Italy, Lewis left London again in 1832 — this time for Spain. ‘A visit to the crumbling majesty of the Alhambra Palace provided one of his earliest encounters with Islamic architecture and fuelled his desire to travel further, off the well-trodden path of the Grand Tourist,’ explains Christie’s Orientalist art specialist Arne Everwijn.

Subsequent visits to Morocco and Gibraltar took him further into the ‘Eastern’ world. Then, in 1837, he travelled to Paris before crossing Italy, Greece and Albania to Constantinople, finally arriving in Cairo towards the end of 1841. 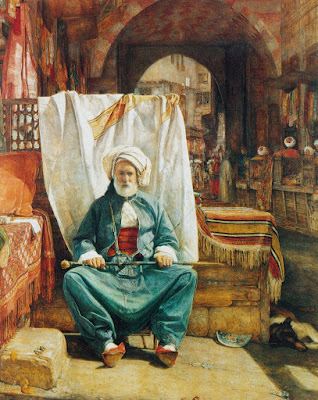 Lewis would stay in Cairo for the rest of the decade, enjoying a luxurious part-European, part-Ottoman existence in the city’s Coptic quarter — in his own words, ‘far from the haunts of European civilisation’.

His friend the British author William Makepeace Thackeray (1811-1863) visited him there, describing him afterwards as an ‘oriental nobleman’ who ‘lives like a languid lotus-eater — a dreamy, hazy, lazy, tobaccofied life’. He added that Lewis employed an attendant named Mustapha who fetched his pipes and coffee, and that he kept a menagerie of exotic pets (most famously a gazelle).

‘Whether or not it was Lewis’s intention, his local dress (often a white turban, red slippers and curved sword), courteous manner and grasp of the local language afforded him access to parts of the city where other foreigners weren’t allowed, including mosques,’ explains Everwijn. ‘And while other artists complained about harassment and Cairo’s “narrow, stinking, crowded streets”, Lewis embraced the city with open arms.’

In 1843-44, Lewis started sketching Cairo’s 16th-century Khan al-Khalili bazaar — the vibrant, commercial heart of the city. With ample, expressive lines and washes of bright colour, the artist drew the lofty wooden ceiling, stone walls and huddles of merchants from all over Europe who had travelled to sell their wares — particularly textiles. ‘His skill was in capturing not only the market’s topography, but also its spirit,’ says the specialist.

In 1851, looking for the commercial success that eluded him in Cairo, Lewis returned to London, eventually settling in the semi-rural village of Walton-on-Thames in Surrey. There, in his quiet studio, he spent the rest of his working life turning the wealth of material accumulated during his stay in Egypt into watercolour and oil paintings — the Bazaar  being one of his largest.

To bring the picture to life, Lewis arranged various people he had met while in Egypt around the cavernous space, including a Bedouin from Sinai, a Nubian servant boy named Abdul Hadi, an elderly Greek and a merchant from Mecca. Between them, he added a self-portrait in red and white traditional robes — a means of embedding himself permanently in the Orient.

He also showed off his skill for painting fabrics by depicting in fine detail the market’s silks, satins, cottons, velvets, muslins and brocades — using the swathes of cloth he and his wife Marian had crated back to Surrey from Cairo. ‘One figure’s turban is an Arabic pashmina which Marian later donated to the Victoria and Albert Museum in London,’ says Everwijn.

Even the two musical instruments in the picture’s foreground — an Egyptian oud and kemengeh — were props from Cairo. Both were subsequently sold in the artist’s estate auction at Christie’s in 1877.

By the time The Bezestein Bazaar of El Khan Khalil, Cairo  went on show at the Royal Academy, Lewis had already secured a buyer — a wealthy wool merchant named David Price, who owned Lilium Auratum, Lewis’s picture of an Arab concubine now in the Birmingham Museum and Art Gallery.

Not long after the unveiling, a wealthy Glaswegian collector offered Price the princely sum of £10,000 for it. He responded by saying that no money should tempt him to part with it.

That sentiment was echoed by Thomas Woolner (1825-1892), the Pre-Raphaelite sculptor, who wrote to Lewis that he should be proud of a work of ‘such superb excellence’, adding that soon his paintings would ‘become established in first-class collections where no money will be able to extract them’.

Woolner’s prediction rings true today. ‘Lewis is regarded as one of the finest Orientalist painters thanks to the dedication and respect he showed towards his subjects,’ says Everwijn. His scenes of life in Egypt remain the most collectable of his works and can be found in the British Royal Collection, the Victoria and Albert Museum and the Tate, as well as in international institutions such as the Metropolitan Museum of Art, the Cleveland Museum of Art and the Yale Center for British Art.