The new adaptation "The Personal History of David Copperfield" brings the classic novel to life with energetic editing and colorblind casting. 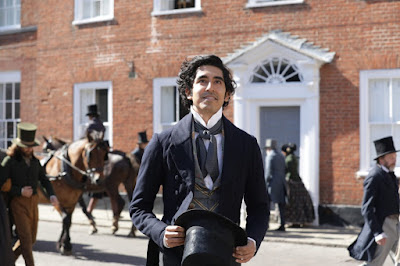 British writer/director Armando Iannucci is mainly known for his scathing political satires like The Thick of It and The Death of Stalin, so a Charles Dickens adaptation is a big change of pace for him. But his version of David Copperfield is a worthy addition to the long history of Dickens films. It approaches the sprawling novel through a briskly paced sensibility that at times is almost inflected with magical realism. It begins with Copperfield, played by Dev Patel, introducing himself to an audience on a stage, and then the backdrop falling away and him walking straight into the fields of his youth, making the transition to the past a physical experience. Such invention makes the movie continually engaging.

The Personal History of David Copperfield is now available on VOD.

Additionally, Iannucci’s love of complex dialogue dovetails well with Dickens’s more colorful sentences, and a deep bench of British talent helps flesh it out. Many of these characters have become their own literary archetypes, but Peter Capaldi’s turn as Mr. Micawber, Ben Whishaw as Uriah Heep, Hugh Laurie as Mr. Dick, and more all more than earn a space in the canon of great Dickens performances. And while Dickens is often associated with British history in terms of whiteness, the colorblind casting emphasizes the universality of the story’s themes around social mobility.