‘WHEN POSSIBILITIES FOR A NEW WORLD WERE ENDLESS’: THE NEW SCHOOL OF PARIS

In the years following the Second World War, Paris witnessed the birth of a new style of lyrical abstraction fuelled by the aspirations of émigré artists. Illustrated with works by Georges Mathieu, Zao Wou-Ki and Chu Teh-Chun offered in Hong Kong

‘A new climate of innovation is being reborn in Paris,’ declared the French art critic Charles Estienne in January 1953. 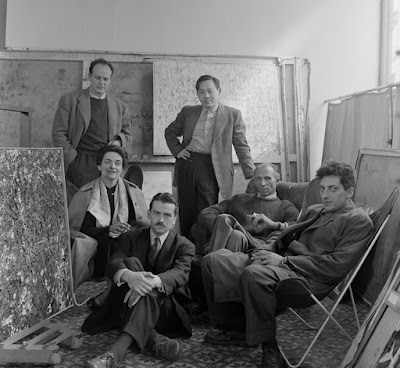 In the wake of the Liberation, young men and women from across the world arrived in the city, intent on reviving its reputation as the cultural centre of Europe. Shaped by the horrors of the Second World War, these ambitious intellectuals had one aim in common: to construct an alternative to the opposing forces of communism and capitalism.

Central to the growing debate was a group of émigré artists with utopian aspirations, who dreamed of a universal art that would transcend borders and nations. They became known as the New School of Paris.

‘It was a very exciting time,’ says Emmanuelle Chan, an associate specialist in the Modern & Contemporary Art, Asia Pacific department at Christie’s in Paris. ‘There were artists from China who were inspired by Matisse and Picasso, and they met other émigrés from Hungary, Germany and Canada, as well as French artists who wanted to know about Asian calligraphy and philosophy. These ideas were fused together to create something new.’

These world citizens of the Left Bank collected around the gallery of Pierre Loeb on Rue des Beaux-Arts. ‘Loeb was a great believer in their work,’ says Chan. ‘The artists he promoted were all good friends; they hung out and travelled together.’

‘I paint fast because it is my rhythm,’ said the New School’s most flamboyant advocate, Mathieu, who brought a balletic sensibility to the style, as seen in his Gouffres Frêles of 1989 (above).

Zao, meanwhile, took a more metaphysical approach. ‘I try to paint as close as possible to my dream,’ he explained — and his 1985 painting 04.12.85 (below) reflects that elusive balance of wonder and light.

When Chu Teh-Chun arrived from Beijing in 1955, he abandoned figuration for the new style almost immediately: ‘What I paint is all about nature… this abstract thing is like what the Chinese say, you can’t explain it, but the magic is there.’ His 1987 painting La Forêt Blanche I (The White Forest I) (below) was created in response to a heavy snowfall in the Alps, and conveys that sense of the sublime.

Before long, the artists attracted the attention of the Abstract Expressionists in New York, fostering a cross-cultural dialogue. ‘They admired each other very much,’ says Chan. ‘Mark Rothko visited Paris and became acquainted with Hartung. And Soulages and Zao spent time in New York with Rothko and Franz Kline.’

The eminently original Mathieu was criticised for his televised painting performances, which the Americans saw as showmanship. ‘I felt a certain coldness towards me,’ he recalled of one trip to the United States in 1957.

‘These artists created a language that could be read by the East and the West, and showed us that a unifying art was achievable’ — specialist Emmanuelle Chan

‘Ideologically they couldn’t have been farther apart,’ says Chan. ‘The Europeans were searching for a universal language, while the Abstract Expressionists believed abstraction could only be understood by Americans.’

The Japanese avant-garde Gutai group, whose performances had inspired Mathieu, didn’t see such deep divisions. They championed both Jackson Pollock (1912-1956) and Mathieu in their 1956 manifesto, declaring: ‘Their work seems to embody cries uttered out of matter, pigment and enamel.’

Likewise Vieira da Silva, who had spent much of the war in Brazil among the artists of the incipient Neo-Concrete art scene, returned to Paris in 1947 determined to push the geometric abstraction she had studied in South America to its limits. Her spatially complex paintings responded to the devastation of war-torn Paris with a fevered syncopation.

‘I look at the street and at people walking on foot with different appearances advancing at different speeds, and I try and see the machinery that organises them,’ she said. ‘I think this is in a way what I attempt to paint.’