A GRAPHIC designer who says he mocked up official documents for Martin Bashir has told the former Panorama reporter to provide "answers" about his famous interview with Princess Diana.

Mr Wiessler told Radio 4's Today programme he was "gobsmacked" to discover the board of governors was later told there had been "steps to ensure that [he] will not work for the BBC again".

He said: "I don't know how you can plausibly tell a story that a graphic designer is to blame. I've been living with this for 25 years.

"When I saw this decree that went out... I was pretty angry... because I thought it was utterly unfair."

The governors' meeting was revealed after an internal BBC document came to light.

Mr Wiessler said of Lord Hall: "People in his position...they shouldn't stand by the big scoop - they should stand by the truth. The person that needs to come forward is Martin Bashir. He's the only one that has the answers." 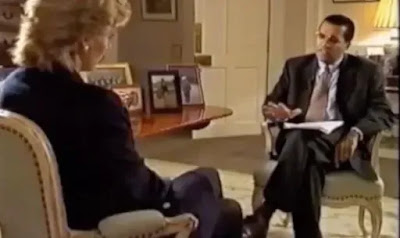 The BBC has said Mr Bashir, now its religion editor, is seriously ill with Covid-related complications.

Lord Hall, who stepped down as director general earlier this year, said in a statement "the focus of the original investigation was whether Diana had been misled... this and any new issues raised will no doubt be looked at".

His comments came after new chief Tim Davie said there would be an independent inquiry. He said: "We are taking this very seriously. We want to get to the truth."

Mr Wiessler was reportedly asked by Mr Bashir to create two bank statements in 1995. He claimed these falsely showed members of the royal household were paid by security services to spy on Diana.

He told ITV documentary The Diana Interview: Revenge Of A Princess: "All I want is for the BBC in this instance to come forward and honestly make an apology."

Diana sent shockwaves through the monarchy after the interview, which included candid details about her "crowded" marriage and Charles's rumoured affair with Camilla Parker- Bowles."