WITH WALT WHITMAN’S SENSUALITY AND SELF-PROMOTION

Whitman’s poetry feels inseparable from his physical presence, his body itself, as does the work of few other poets. 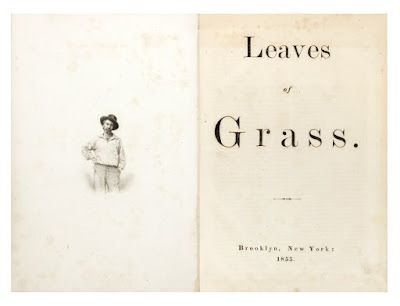 Title page and frontispiece spread of the first edition of Walt Whitman, Leaves of Grass. Brooklyn, New York: [printed for the author by Andrew and Thomas Rome], 1855 (courtesy of the Grolier Club, photo by Robert Lorenzson)

Fashions in poetry change only slightly more slowly than fashions in couture. Yet while once widely popular poets like Rod McKuen or Rupi Kaur have their day and are forgotten, the beatific, Santa Claus-like Walt Whitman seems to stick in everyone’s mind as the image of “The Poet.” The 200th anniversary of Whitman’s birth provides the occasion for all kinds of celebrations of America’s Good Gray Poet — or Good Gay Poet, depending on your emphasis. “Poet of the Body”: New York’s Walt Whitman, an exhibition at the Grolier Club in Manhattan, confirms that Whitman worked very hard indeed to not only craft his poetry, but also engineer the celebrity he attained during his lifetime and the canonical status he enjoys today. Whitman didn’t just pioneer free verse — he pioneered relentless self-promotion. Were he alive today, I’ll bet we’d be reading installments of “Song of Myself” on Instagram and Twitter.

I don’t mean to imply that Whitman at his best isn’t a very fine poet, even a great poet (though adherents of Amherst’s Emily Dickinson might take issue with the exhibition catalogue’s repeated assertions of Whitman’s “artistic supremacy”). But Whitman seems to have figured out — a full century before Andy Warhol — the thoroughly American insight that great art doesn’t sell itself: if you want to get a broad public to swallow a form-busting, genre-spanning new poetry, you need a canny and persistent marketing strategy. You need a brand. And “Walt Whitman,” the genial, white-bearded representative of democracy, processor of multifarious experience, lover of men and women alike, would become the brand under which the endlessly accreting Leaves of Grass (seven separate editions, in numerous states, before the poet’s death in 1892) marketed itself.

The first edition of Leaves of Grass (1855) has no author’s name on the title page (though it does appear in the as-yet-untitled “Song of Myself”: “Walt Whitman, an American, one of the roughs, a kosmos / Disorderly fleshy and sensual”). Instead, there’s a tantalizing frontispiece engraving of the bearded author, shirt collar open, fixing the reader with a come-hither gaze. For the second edition (1856), Whitman snatched a phrase from the letter Ralph Waldo Emerson wrote thanking him for the book (“I greet you at the beginning of a great career”) and printed it boldly on the spine; Emerson was less than pleased. These books were self-published and self-reviewed: Whitman wrote no fewer than five anonymous notices of the first edition, some of which he reprinted in a promotional booklet. 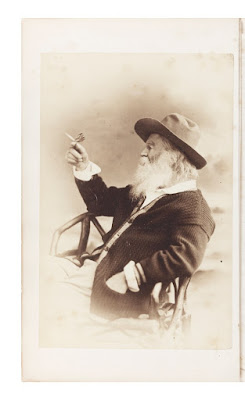 Whitman was in essence conducting an end-run around the gatekeepers of American literary culture, the Boston Brahmins who had decided that the weak tea of Longfellow, Whittier, and Lowell was the most important poetry the Republic had to offer. Where the New England crowd served up pallid versions of Wordsworth and Tennyson, Whitman’s was an endearingly DIY, proto-punk aesthetic. He clearly didn’t have the patience to write in traditional forms and meters (“O Captain, My Captain!,” his rhymed elegy for President Lincoln, is a perfectly dreadful poem), so he developed a long-lined, rhythmically flexible free verse that could embody his vision of the New World as a panorama of physical and spiritual activity. Of course he had his influences, among them the King James Bible, James Macpherson’s Ossian cycle, and Martin Farquhar Tupper’s Proverbial Philosophy (1837), but what’s important is that the poems of Leaves of Grass are musical, quirky, exquisitely detailed, and moving — while Ossian and Tupper are nearly unreadable today.

The Grolier is one the nation’s oldest society of bibliophiles, and it maintains a fine research library and exquisite exhibition space in its midtown digs. The current show, based largely on the collection of Grolier member (and exhibition co-curator) Susan Jaffe Tane, presents a wealth of Whitmaniana: copies of every edition of Leaves of Grass published during the poet’s life; letters and manuscripts; many, many photographs (Whitman was by far the most photographed American poet of his century), including the famous frontispiece shot where he contemplates a cardboard butterfly perched on his finger; an array of Whitman-branded material (a cigar box, an Old Crow whiskey advertisement, an applesauce can, even a J. Peterman page describing their “Walt Whitman pant”); and a fascinating selection of artist’s books and multimedia presentations inspired by Whitman’s verse. At every turn one encounters that iconic, boldly legible signature “Walt Whitman”: on title pages, on promotional postcards, even on the bindings of books. By the end of Whitman’s life, it’s become a trademark.

The exhibition’s title — “Poet of the Body”: New York’s Walt Whitman — waffles a bit: does it mean to emphasize Whitman’s corporeality, even sexuality, or his ties to New York? At any rate, the show provides ample evidence of each one’s prominence. It closely traces Whitman’s roots in the greater New York area, from the Long Island (or “fish-shape Paumanok,” as he called it) of “Out of the Cradle Endlessly Rocking” to the Brooklyn of “Crossing Brooklyn Ferry” to the Manhattan beer-cellar Pfaff’s — where, for a while in the late 1850s, Whitman held court as the centerpiece of America’s first Bohemian scene. But Whitman is also without question the 19th century’s preeminent “poet of the body,” as abundantly seen in the “Children of Adam” and “Calamus” sections of Leaves of Grass, which deal respectively with heterosexual and same-sex physical attraction. In 1865, Whitman lost a job at the Department of the Interior when a supervisor discovered some of his racier poems; later in the century, English writers John Addington Symonds and Edward Carpenter would find in the “Calamus” poems a vocabulary for the nascent gay awareness movement. 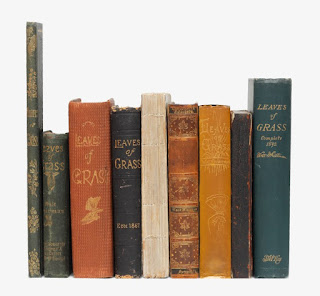 Camerado, this is no book,

Who touches this touches a man,

(Is it night? are we here together alone?)

It is I you hold and who holds you,

I spring from the pages into your arms —

Even more intimate is his address in “Whoever You Are Holding Me Now in Hand” (from “Calamus”), where the “me” is not merely the poet’s book but Whitman himself:

Or if you will, thrusting me beneath your clothing,

Where I may feel the throbs of your heart or rest upon your hip,

Carry me when you go forth over land or sea;

For thus merely touching you is enough, is best,

And thus touching you would I silently sleep and be carried eternally.