FINALLY TRANSLATED ( AHORA EN ESPAÑOL). ON THE COVER OF THE FREEWHEELIN' BOB DYLAN WORKED HARD TO SHAKE THAT ROLE 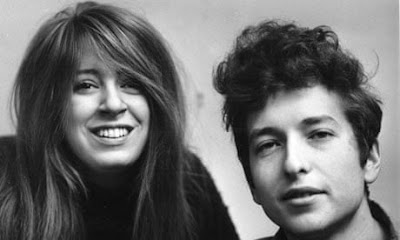 Since her death on 24 February at the age of 67, Suze Rotolo has been commemorated as "Bob Dylan's muse" and the girl on the front cover of The Freewheelin' Bob Dylan – Dylan's second album which propelled him to fame. Although it's not surprising that the obituaries highlight her relationship with the singer, "Bob Dylan's ex" is really not an adequate epithet for Rotolo. A trained artist and jewellery maker, she never sought the spotlight herself, but she was a fascinating woman who helped shape the rebellious 1960s and was part of the crowd that not only hoped, but made sure, that the times were a-changin'.

As a teenager Rotolo had a passionate relationship with Dylan and inspired some of his early, most romantic songs, like Boots of Spanish Leather and Don't Think Twice, It's All Right. In the first volume of his memoirs, Chronicles, Dylan wrote of their first meeting: "Cupid's arrow had whistled past my ears before, but this time it hit me in the heart and the weight of it dragged me overboard."

After the release in 1963 of Freewheelin', with the iconic cover photograph of Dylan and Rotolo walking together in New York's Greenwich Village on a freezing winter day, the pair became the poster children of a generation. Yet, as Rotolo wrote in her wonderful and unassuming memoir of Greenwich Village in the 60s, A Freewheelin' Time, she resented being cast in the role of a musician's "chick" and insisted that she was more than just a "string on Dylan's guitar".

Perhaps we can forgive even the freewheelin' Village for having failed to rid itself completely of this reductive take on womanhood – after all, most of America was still socially conservative and to know their place was seen as a matter of female intuition. But we should know better now than to buy into the image of Rotolo as Dylan's handmaiden.

After all, it was Rotolo, daughter of Italian working-class communists, who schooled Dylan in the politics of the left and who first made him aware of the labour and civil rights movements. She was only 18 when they met (Dylan was 20), but still introduced him to the work of a range of poets and writers, such as Rimbaud and Bertolt Brecht.

After the sudden death of Rotolo's father in 1958, her mother took to drinking. The teenage Suze began to take Sunday trips to Washington Square in the Village, joining the folk musicians, poets and political activists who took on the establishment in verse and propaganda. At 17, she caught the subway from Queens to the Village for a final time, "without looking back".

While still in high school, Rotolo volunteered for the Congress of Racial Equality, marching on Washington for civil rights and desegregation. At the age of 20, she made national news when she and four other students stood up for the "free travel of free Americans" by, in defiance of the government travel ban, heading over to Cuba. The group spent two months touring factories and schools and met Fidel Castro and Che Guevara. It was an incredibly brave thing to do.

In A Freewheelin' Time, Rotolo paints a vivid picture of the Greenwich crowd, an image-conscious lot who spent much time in earnest conversation in smoky cafes, bars and basket houses (informal venues where musicians passed around a basket for tips). Nevertheless, they believed that they "could change perceptions and politics and the social order of things". "We had something to say," Rotolo wrote, "and believed that the times would definitely change". It was a time when reinvention was a virtue and families were baggage. Where you came from mattered less than where you were heading.

Reading her book it is clear that Rotolo tried hard to wrest herself out of her role as "Dylan's muse". Over the years, she has been featured in biographies, documentaries, fiction films and museum exhibits, but she has rarely given interviews and has been respectful of Dylan's and her own privacy. Even her book is more a tribute to an era that "spoke a language of inquiry and curiosity and rebelliousness against the stifling and repressive political and social culture of the decade that preceded it" than to her relationship with Dylan.

It was a formative experience, and came to influence her life in both wanted and unwanted ways. But it wouldn't be fair simply to cast Rotolo back into the very role she tried so hard to shake.