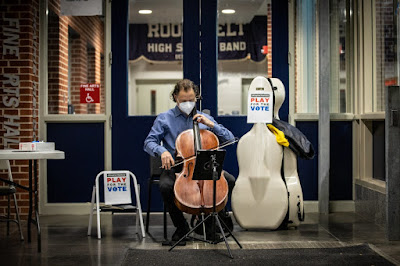 Across the US, ballot measures included important questions on Confederate monuments, arts funding, and more.

The nation is anxiously awaiting the results of historic presidential and congressional races that will have a sweeping impact on areas ranging from healthcare to social justice and more. At the local level, however, ballot measures are a significant way of influencing policy and an important form of direct democracy. This year, voters in 32 states decided on 124 measures related to critical issues including affirmative action, legalizing marijuana, taxing the rich, and Puerto Rico’s statehood.

When it comes to the arts, several ballot propositions in 2020 tackled questions about public funding for culture and what to do with controversial monuments. Notably, Jersey City became the first municipality in the state of New Jersey to establish an arts tax, with 64% of residents voting in favor of a municipal arts and culture trust fund. Mayor Steven Fulop had initially removed the question from the ballot in April, as the economic pressures of the pandemic reshifted financial priorities. In response, arts leaders banded together to poll 400 voters and found that the majority would support the arts tax, successfully getting the measure back on.

Equivalent to half of a penny per $100 of assessed property value — about $25 a year for the owner of a $500,000 house —  the tax is expected to generate between $1 million and $2 million a year, according to the New York Times. That revenue will go toward expanding afterschool arts education programming as well as directly funding creative activities across disciplines, from music and dance to folk arts and historic preservation.

In Virginia, residents in six counties voted on measures to decide the fate of several local Confederate monuments. As the country reckons with its history of racist violence, the presence of public statues that commemorate that past has been called into question and become an increasingly hot-button issue in the former capital of the Confederacy.

Based on these ballot results, however, a number of monuments won’t budge anytime soon. The majority of residents in Halifax, Warren, Tazewell, and Franklin counties voted no on referendums proposing to relocate Confederate statues from their localities, and more than half of voters in Charles City County voted not to remove two Civil War monuments. In Lunenburg County, 71% voted yes to keep a statue of a Confederate soldier, erected in 1968, at its current location in the courthouse’s lawn. (All were rural counties, and perhaps unsurprisingly, only one of them — Charles City — went bright red in the presidential election.)

Prior to 2020, local governments in the Commonwealth did not have the authority to dismantle Confederate statues. After Democrats took control of both the state House and Senate in 2019, they gave localities permission to dismantle Confederate statues, though they still face procedural hurdles that make it harder to do so. While more progressive cities like Richmond and Norfolk expedited the removal of several monuments this year in the midst of protests, the six aforementioned counties asked residents to weigh in on the ballot instead. The referendums are non-binding, however, meaning local boards could choose to go against voters’ wishes.

Two counties in south Arkansas, a historically Republican state, also voted to keep Confederate monuments in place. Based on the results of the ballot measure, statues outside the Union County courthouse in El Dorado and the Ouachita County courthouse in Camden will still stand.

Elsewhere in the South, a related proposition was on the ballot. In Mississippi, Ballot Measure Three gave residents a chance to vote on the state’s new flag design. Until this year, Mississippi was the last state in the country whose flag featured a blue saltire dotted with 13 white stars — the recognizable emblem of the Confederacy and a popular insignia of white supremacist groups. In June, the House and Senate passed a bill to immediately retire the state flag. Mississippians voted overwhelmingly in favor of the new design, which depicts a magnolia blossom, the state flower, surrounded by 20 stars representing the 20th state in the union. A gold five-point star recognizes Mississippi’s Indigenous tribes.

Other ballot measures affecting the way the US revisits and revises its past include Question One in Rhode Island, which proposed removing the words “Providence Plantations” from the state’s official name. The measure passed with 52.8% of the vote, a narrow victory, but a marked shift from 2010 when 78% of Rhode Islanders rejected the change.

It’s worth noting that although museums and nonprofits are generally expected to remain nonpartisan, they are allowed to engage in election advocacy — and can openly support or oppose policies that might impact the sector. The American Alliance of Museums’s “Guide to Election Year Activities,” museums specifically mentions ballot measures, such as initiatives to set aside sales tax for cultural organizations, as an area where museums can make their voices heard.