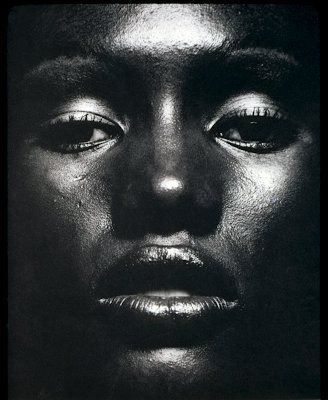 From Fri 30 Oct, our galleries and café will be temporarily closed in response to the COVID-19 crisis. Our shop remains open.

A cross between fan-fiction, study and biography, Grace Before Jones: Camera, Disco, Studio departs from the iconic singer’s career and her collaborations with artists, designers, photographers and musicians to question black image-making and gender binarism as well as both performance and the performance of life.

In 1979, Grace Jones had her face moulded by her collaborator and then-partner Jean-Paul Goude to produce multiple ultra-realist masks. These were intended to be worn by fellow musicians, performers and models, but were also for herself. Grace Jones had multiplied, turned herself into sculpture and serial form – an armada of Grace. Departing from the observation that Grace Jones is not one but multiple, the exhibition Grace Before Jones: Camera, Disco, Studio unfurls a range of Grace Joneses: from disco queen to dub cyborg; Jamaican to French; runway model to nightclub performer; black to white; feminine to masculine.

In embodying these seemingly opposite poles at once, Grace Jones entangles binary systems in style and in flesh. She both exemplifies and complicates theories of gender, sexuality, performance, race and cybernetics, discourses that flourished in parallel to her career. Dexterous in the art of self-reinvention, Jones’ modes of performance can be said to borrow from what academic Daphne Brooks has called ‘the theatricality of blackness’, whose techniques are, in the words of Malik Gaines, ‘able to articulate not the wholeness of black identity, but rather the constructedness of all identity’.

Grace Before Jones presents a multifaceted portrait of the iconic singer. Travelling through time, it also seeks to give both a historical background and contemporary perspective to Grace Jones’ image-making, while expanding on stage design, music and fashion. The exhibition presents itself as an alternative way to write and tell art history.