He has covered nine presidents over 50 years, making him perhaps the country’s most enduring chronicler of the Oval Office. His latest is yet another best seller, drawing praise and criticism along the way. 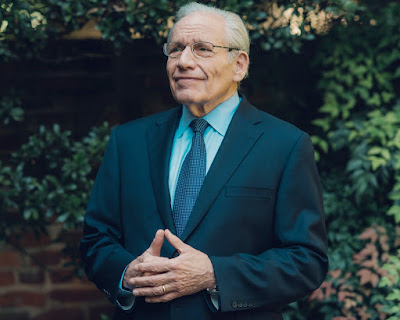 “What Trump has done, particularly on the virus — I have lots of emotions and reporter’s conclusions about it, but I’m embarrassed for him. I am embarrassed for the country,” Bob Woodward said.Credit...Jared Soares for The New York Times

By Elizabeth A. Harris

When Bob Woodward was writing his latest book, “Rage,” he kept a stash of Olympus digital tape recorders scattered around his Washington, D.C., rowhouse. There was one at his bedside, one in his third-floor office, one that floated between the kitchen and the den, and another always in his pocket.

He had them everywhere because he often didn’t know when President Trump would call.

“It was a very unusual experience,” Mr. Woodward said in an interview. “I have to be ready to take that call at 10 o’clock at night and then say, what about George Floyd? Or what about the Supreme Court? What’s your relationship with Mitch McConnell?”

If this was an unconventional way to write a book about a sitting U.S. president, Mr. Woodward, 77, would be in a position to know. In his 50 years as a journalist, he has written 20 books and covered nine presidents. The scope and depth of his work have earned him a unique place in politics and journalism as perhaps the most enduring chronicler of American presidents. At either end of his long bibliography are two of the most divisive American presidents in generations: Richard Nixon and Mr. Trump.

“There are a lot of people who have written great books, masterpieces, about individual presidents,” said Jamie Gangel, a special correspondent at CNN and a longtime friend of Mr. Woodward. “But I can’t think of anybody who has his breadth of experience.”

Perhaps the biggest news out of “Rage” comes from two interviews he conducted with the president earlier this year: in February, when Mr. Trump told him that the coronavirus was “deadly stuff,” and in March, when Mr. Trump said he “wanted to always play it down” so as not to create panic.

Critics have accused Mr. Woodward of holding those revelations back for his book, saying that had he decided to release the information earlier, he might have saved lives. Mr. Woodward has strenuously denied this, saying that at the time of the February call, he thought Mr. Trump was referring to what was going on in China. Believing the United States to be safe from the virus, Mr. Woodward kept traveling around the country. And by the time the call in March occurred, the president had already made an address about the pandemic from the Oval Office.

Another criticism, one that has followed Mr. Woodward for years, was that he wrote books stuffed with facts while offering little in the way of analysis. But his more recent work, including his final take on George W. Bush and both volumes on Trump, have been clearer in their judgments. The last line of “Rage” is among his most direct: “When his performance as president is taken in its entirety, I can only reach one conclusion: Trump is the wrong man for the job.”

Mr. Woodward said he had no plans to write that sentence until he typed it.

“I’ve done all this work on presidents,” Mr. Woodward said. “Some of them have made mistakes, Nixon was certainly a criminal, but what Trump has done, particularly on the virus — I have lots of emotions and reporter’s conclusions about it, but I’m embarrassed for him. I am embarrassed for the country.”

In its first week, “Rage” sold 600,000 copies, according to its publisher, Simon & Schuster, and debuted at No. 1 on The New York Times’ best-seller list. While those are monster sales by any normal measure, they’re significantly lower than sales for his first Trump book, “Fear,” which was published in 2018. “Fear” sold 1.1 million copies in its first week, and more than 750,000 copies in its first day. Mary Trump’s book on her uncle, Mr. Trump, broke Simon & Schuster’s record this year, selling 950,000 on day one.

Simon & Schuster has been Mr. Woodward’s publisher since his first book, and their success together has been extraordinary. All 20 of his titles have been Times best sellers, and 14 have reached No. 1. (Simon & Schuster published a book in 1992 by Mr. Woodward and David S. Broder about Dan Quayle, which would bring his tally to 21, but it was a compendium of work that had already appeared in The Washington Post.)

Leonard Downie Jr., the former executive editor of The Washington Post, has known Mr. Woodward since they worked together on Watergate stories in the 1970s. He said that Mr. Woodward stood out at the newspaper for his tidy appearance. Newsrooms can be sloppy places, but Mr. Woodward was always neatly dressed. He was extremely polite, almost obsequious, Mr. Downie said, and he kept a toothbrush and toothpaste in his desk.

Today, Mr. Woodward enjoys the luxury of time daily newspapering can prohibit, and he said he always tries to schedule at least four hours for interviews, which often take place over a meal or coffee at his house, where he has lived since 1976. But if a source is dodging his calls, he’ll still show up on their doorstep — he likes to joke that 8:17 p.m. is the best time to drop by. While he was writing a book about George W. Bush, Mr. Downie recalled, there was a general he wanted to talk to who had not responded to several attempts to contact him, so Mr. Woodward went to his house and knocked on his door after dinnertime. The general recognized him right away.

“Are you still doing this [expletive]?” he asked. “Bob said, ‘Yes, and there’s something I want to talk to you about.’ The general was so nonplused he invited him in, and Bob was there for hours.”

Another piece of Mr. Woodward’s process is that he has all his interviews almost immediately transcribed. This has led to a trove of information — he has decades’ worth of transcripts that are typed out by his assistant, in addition to memos written before tape recorders were commonplace. He estimates he has 200 cardboard boxes, kept in temperature controlled storage, that are filled with records going back to when he worked for the Montgomery County Sentinel.

His wife, Elsa Walsh — who is also a journalist, and his first editor on all his books — said that Mr. Woodward shares them with journalists he trusts.

“Bob has a really very interesting archive on Biden,” Ms. Walsh said. She once came downstairs in the morning in her workout clothes to find two people in their living room.

“I was like, ‘Bob, who is that?’” she said. “It was two reporters from the Post going through all the old Biden files. That’s not uncommon.”

After finishing “Fear” in 2018, Ms. Walsh said her husband was left deeply troubled about what might happen if a crisis erupted, and so he set out to write a book on Mr. Trump’s approach to national security. Mr. Woodward wanted it to come out before the election, and had less than two years to do it. A quick turnaround, but he felt obligated, Ms. Walsh said.

Then, Covid-19 happened, and in March, the country began to shut down. Just over two months before he turned it in, he tore the book in half, devoting about 40 percent of it to the pandemic.

Mr. Woodward kept reporting until the last possible moment. At one point, the book recounts a phone call in which Mr. Trump talks about the election being 105 days away — which was fewer than 60 days before “Rage” was released.

Even as Mr. Woodward raced to complete the book, his editor at Simon & Schuster, Jonathan Karp, the company’s chief executive, didn’t know much about it. Mr. Woodward would call on a secure app from time to time to offer updates, but few details. Mr. Karp said he didn’t really know what Mr. Woodward was writing until he turned it in.

But given Mr. Woodward’s track record for the company, Mr. Karp thought that was just fine.

“I have a saying around here: In Bob we trust,” Mr. Karp said. “So we drop what we’re doing when Bob Woodward tells us he’s ready to run.”