Videos of Jonothon Lyons, an accomplished performer, have gone viral for his romps around New York City in a lifelike rat costume. 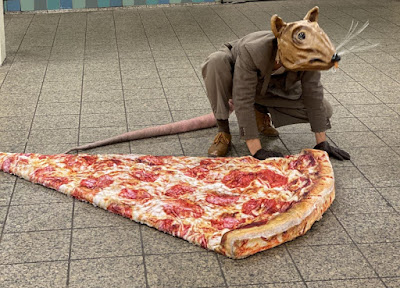 The internet is squeaking with delight this week at a 23-second-long clip of a figure in a rat costume, complete with a long tail, whiskers, and mousy gray suit, dragging a life-sized pizza slice up the stairs in a New York City subway station. As surreal as it may be, the sight is intimately familiar to urban dwellers who remember video footage of a real rodent carrying an entire cheese slice up the platform steps a few years back. The strangely endearing, ubiquitous New Yorker became lovingly known as “Pizza Rat.”

The man behind the very realistic mask in the more recent viral video that went viral is Jonothon Lyons, an accomplished dancer, theater artist, and puppeteer whose previous credits include the Blue Man Group, Sleep No More, and the Metropolitan Opera’s 2019 staging of Madame Butterfly. For his latest act, however, no tickets are needed: his audience is made up of the pedestrians and underground riders of New York, many of them surely aching for the lively theater and cultural scene that once pulsed through the city before the pandemic hit.

Buddy the Rat, as Lyons has baptized his wiry-tailed character, brings the stage to the streets and the subway platforms: getting pets on the Brooklyn Bridge, showing off for Minnie Mouse in Times Square, and encouraging train riders to wear a mask.

In an interview with Hyperallergic, below, Lyons tells us how Buddy was born and why he’s shaking up the performance art scene right now.

Jonothon Lyons: Twelve years ago, I was working for a theater company in Portland, Oregon called Imago Theater, and they have a show called Frogs, where we played big animal characters in masks. I played a frog, a polar bear, an anteater, and a penguin, but I never played a rat, and I always wanted to. In 2009, I made my own rat mask and went out in Times Square and ran around, put it up on YouTube, and it got around 70,000 views. It wasn’t gigantic, but it was enough that in the back of my mind I kept thinking, “I need to take this rat out again.”

Hyperallergic: I’ve just emerged from a rabbit hole of TikTok videos of you performing in the costume. They’re incredible, and they’re really resonating with people right now. How did Buddy go viral?

JL: I’m friends with this film director Todd Strauss-Schulson (Isn’t It Romantic, The Final Girls, A Very Harold and Kumar 3D Christmas). I told him I had this rat character I’ve been wanting to do more with it, so we conceived of a little three and a half minute-long film. We shot it the week leading up to the election, in abandoned SoHo, as the windows were being boarded up — a very surreal and uncommon vision of New York. After the first night of shooting, a stranger had posted a video of me that got 1.7 million views that day. We wrapped up the movie, and over the next few days I started going out on my own and posting the content to TikTok and Instagram, and it really took off.

H: What’s your experience been like as a rat on the subway? What kind of reactions are you getting from people?

JL: People react with either joy, fear, or radical indifference. I’m just out there to have fun and make people smile, and I like that it’s a little mischievous, there’s definitely a little bit of a prankster going on, but I’m not there to aggravate anybody or get in anybody’s way. For the most part, people are really seeming to enjoy it. New York City is the world’s capital of live performance, and our doors have been shuttered since March, so we haven’t seen any theater — everything’s been virtual. I think this is having such a big response because I brought something out into the streets and into the subways that we only usually get to see up on a stage.

H: Do you think people see it as performance? You mentioned a few different reactions — do you think some people think, “Oh, a dude in a rat suit, just another day in New York”?

JL: Yeah, exactly. I do like that it’s being described as performance art, because that’s the most accurate thing: I consider myself a theater artist, and I’ve had a long career, so that’s where I come from, legit theater. For example, the components of the costume are a lot more sophisticated than people might realize at first glance: the interior of the mask has electronics in it, the eyes are rigged to blink, the whiskers are made of fiberoptic cables that can light up. I took a lot of care into the way I sculpted it. The grooves of the face reflect light in a very specific way to evoke a living creature. Sometimes, when I encounter real animals, like a dog or a cat, they will often freak out because they see me as a four-legged, living thing. I have someone who made the tail, but everything else I built, I found the pieces for the suit and built the mask from scratch.

H: In some ways, it really captures the spirit of performance art, which is very much about blurring the boundaries between art and life.

JL: I like that I’ve struck that balance. Performance art is one of those terms that’s a little hard to describe. The Blue Man Group I performed with, for example, is often described as performance art, which the founders have said is accurate. But the reason it’s a little strange to attribute the term to them is because of their success — because people don’t think of performance art as something that is wildly internationally commercially successful. They don’t think of performance art as something like what I’m doing, which is accessible. A lot of people get it, and it brings a smile to their face — it’s not, you know, like someone shaving all their hair off their head in public, where people might not understand why they’re doing this.

H: Right, there’s a huge level of accessibility to what you’re doing. New Yorkers of all ages and backgrounds can look at this and recognize a rat as part of the urban landscape. 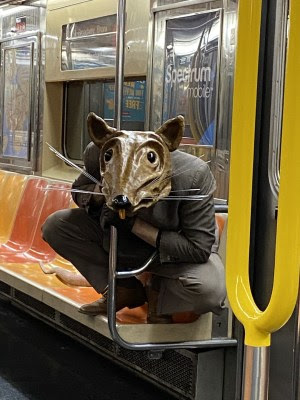 Buddy the Rat brings the stage to the streets, the subway platforms, and even the trains. (image courtesy of Jonothon Lyons)

JL: And what’s really exciting is that it’s not just part of the landscape of New York. Rats are part of the landscape of the world. They’re what’s known as a commensal species, which is a species that lives right beside another one without causing it active harm. It was my dream when I was conceiving of this project that I would one day travel the world doing it. I want to go to basically any country that would have me and do these appearances in public squares, because I feel like people all around the world, no matter the culture or language, will have a response to it. Now, thanks to TikTok and Instagram, it is getting international reach. I have people in Russia, Mexico, and Brazil making “TikTok duets”: filming themselves watching the video of me getting on the subway train and smiling, and talking. I don’t know what they’re saying, but it’s really amazing and makes me feel like my intuition that people all over the globe would get it is right.

H: Are there any particularly memorable experiences that you can share from your experience doing the performance? Anything that was uncanny or weird or funny or strange?

JL: Something I really love to do, if I spot an Instagrammer doing a photoshoot, is to run up beside them and photobomb a little bit. That first night, when I was just running around Times Square, I did that with some girl, and when I took a few steps and I realized there was someone standing right in front of me, I was in somebody’s way. But I can’t see much out of the mask so I didn’t really know what their deal was. When I eventually got out of the mask, my friend who was helping me out said, “You just ran into a completely naked man.” I was like, what are you talking about? I looked at the video and yeah, the guy was like, 90% naked, and it’s just…so perfect. He was in the middle of Times Square, naked, on a Wednesday evening.

H: That’s hilarious, because you managed to run into someone who was maybe doing something weirder than you were.

JL: Exactly! That’s what someone on Twitter said: “It’s so New York that the guy in the rat suit is not the weirdest thing happening here.”

Follow Buddy’s adventures on Lyons’s Youtube, Instagram, and TikTok profiles (@jonothonlyons) or using the hashtag #buddytherat. The short film about Buddy directed by Todd Strauss-Schulson (@straussschulson) will be released on November 26 on both their social media accounts.