Robert van Gulik, author of the Judge Dee mysteries, enjoyed a diplomatic career that spanned continents. Yet his passion lay in the art and culture of China, and now his remarkable collection of paintings and calligraphy comes to Christie’s 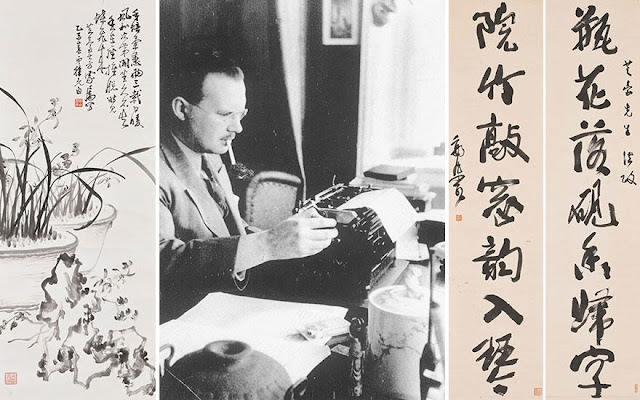 From childhood, Robert van Gulik (1910-1967) was immersed in the art, language and culture of Asia. Growing up in present-day Jakarta, he learned Malay and Javanese, later becoming fluent in Chinese and Japanese as well as Tibetan and Sanskrit. At the age of 25, he joined the Dutch diplomatic service and travelled extensively through China, where he was known as Gao Luopei, and set a path to becoming one of the most accomplished sinologists of the 20th century.

‘Singularly talented, strikingly adventurous and remarkably charismatic, Van Gulik was a true polymath,’ says Dr Man Kung, a specialist in the Chinese Paintings department at Christie’s. ‘His collection reflects the unique qualities of this exceptional figure, who did more than any other Westerner to bridge the cultural divide between Asia and Europe in the mid-20th century.’

Works from Van Gulik’s collection are to be offered at Christie’s in a dedicated online sale, On Wings of Song: Chinese Paintings and Calligraphy from the Collection of Robert van Gulik, from 18 November to 2 December.

In 1943, Van Gulik married Shui Shi-Fang, the daughter of a Qing dynasty imperial mandarin, and was assigned to the Dutch embassy in China, then based in the temporary wartime capital Chongqing. The city had become an extraordinary melting pot of refugee intellectuals, foreign correspondents and political and military figures from across China and the Allied powers; Van Gulik was quickly absorbed into its cultural and political milieu.

Through his mastery of the seven-stringed qin — an ancient instrument revered by literati — Van Gulik was introduced to the city’s pre-eminent scholars. He also joined the Tianfeng Qin Society, which met to celebrate the instrument through performance and discussion.

‘In Chongqing, Van Gulik was widely accepted by Chinese intellectuals,’ affirms Dr Kung. ‘Being recognised as one of their own was what made him truly special.’

In 2014, in recognition of his contribution to the city, more than 100 works from his collection were donated to Chongqing’s Three Gorges Museum. Today they are on display in an exhibition room named in his honour.

During his diplomatic postings from the 1930s to the 1960s, Van Gulik amassed a significant collection of modern Chinese calligraphy — much of it received as gifts from leading scholars, artists and politicians — in addition to classical paintings, calligraphic scrolls and albums, and collectors’ seals, from the Ming (1368-1644) and Qing (1644-1911) dynasties.

The first section of the sale comprises works by important scholars and government officials, such as the poet and calligrapher Shen Yinmo (1883-1971), the politician Chen Lifu (1900-2001), and Guo Moruo (1892-1978), a radical poet, politician and author who also translated Goethe, Schiller and Tolstoy. Guo’s Couplet Calligraphy  is one of many works in the sale personally dedicated to Van Gulik.

The second grouping centres on Van Gulik’s musical circle in Chongqing, whom he cultivated for their knowledge, and who in turn appreciated his connoisseurship.

Travels to the Netherlands, the United States and across Asia

Finally, the sale features a small but notable grouping of academically significant classical works, mostly acquired in Japan. These include historic imperial edicts from as early as the 16th century, which record official proclamations in exquisite script.

A fascinating moment in the history of Buddhism is documented in several calligraphy scrolls by senior monks of the Zen Ōbaku sect — monastic émigrés who left southeastern coastal China for Japan in the mid-17th century. These include the Buddhist monk Donggao Xinyue (Tōkō Shin’etsu, 1639-1696), whose writings Van Gulik actively collected, and the Ōbaku Zen master Muan Xingtao (Mokuan Shōtō, 1611-1684).

Van Gulik returned to the Netherlands in April 1946, where he worked at the Ministry of Foreign Affairs in The Hague before taking up diplomatic postings in the United States and across Asia. Works acquired at that time include Rural Village Life, a painting by Singaporean artist Seah-Kim Joo, which will be offered on 3 December in the Modern and Contemporary Art Morning Session at Christie’s in Hong Kong; and Ghost Amusement (1749), below, by the Qianlong period artist Luo Ping, which was bought in Macau.

Throughout his career, Van Gulik continued to publish translations, scholarly works and fiction. ‘Perhaps his most popular writing was the Judge Dee mysteries,’ says Dr Kung. Van Gulik borrowed his protagonist from Ming dynasty detective stories, themselves based on a real magistrate of the earlier Tang dynasty.