FROM SÈVRES TO FIFTH AVENUE: FRENCH PORCELAIN AT THE FRICK COLLECTION

April 28, 2015 to April 24, 2016
Between 1916 and 1918, Henry Clay Frick purchased several important pieces of porcelain to decorate his New York mansion. Made at Sèvres, the preeminent eighteenth-century French porcelain manufactory, the objects — including vases, potpourris, jugs and basins, plates, a tea service, and a table — were displayed throughout Frick’s residence. From Sèvres to Fifth Avenue brings them together in the Portico Gallery, along with a selection of pieces acquired at a later date, some of which are rarely on view. 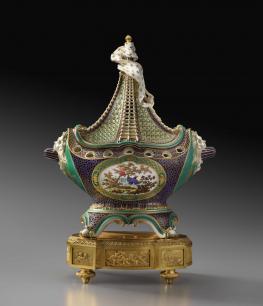 The exhibition presents a new perspective on the collection by exploring the role Sèvres porcelain played in eighteenth-century France, as well as during the American Gilded Age.
The exhibition is organized by Charlotte Vignon, Curator of Decorative Arts.

The exhibition is made possible by Sidney R. Knafel and Londa Weisman.