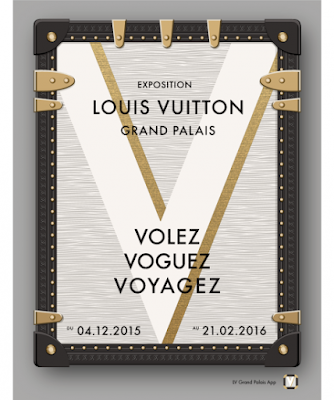 Louis Vuitton will celebrate “Volez, Voguez, Voyagez – Louis Vuitton” at the Grand Palais from 4 December 2015 to 21 February 2016. Curated by Olivier Saillard, this exhibition retraces Louis Vuitton’s great journey from 1854 to today, through depictions of the Maison’s founding members and those who create the Louis Vuitton of tomorrow.
The Grand Palais was constructed in 1900 during one of the most spectacular World’s Fairs in Paris, which welcomed 48 million visitors. At this turn of the century, George Vuitton was in charge of organising the entire section dedicated to "Travel & Leather goods". The Louis Vuitton booth, surprisingly in the shape of a merry-go-round, presented the Maison’s most innovative luggage and elegant bags and was the centre of attention.
The thematic journey conceived and designed by Robert Carsen navigates through nine chapters, opening with the absolute symbol of Louis Vuitton: an antique malle. An innately modern design, it foresaw what were to become the Maison’s iconic codes and epitomised Louis Vuitton’s daring spirit. The exhibition presents objects and documents from Louis Vuitton’s Heritage as well as a selection of pieces lent by the Palais Galliera, Musée de la Mode de la Ville de Paris. A section dedicated to Craftsmanship closes the exhibition.
CURATOR: Olivier Saillard
ARTISTIC DIRECTOR AND SET DESIGNER: Robert Carsen