EXHIBITION FEATURES
Test your powers of observation as you journey through The International Exhibition of Sherlock Holmes. This immersive, interactive experience combines science and history to bring to life the Victorian era vividly portrayed in the beloved Sherlock Holmes stories, masterminded by physician-turned-author Sir Arthur Conan Doyle.

THE WORLD OF SIR ARTHUR CONAN DOYLE
Arthur Conan Doyle was a curious and tireless investigator his entire life. Begin by exploring his world, starting as a medical student at Edinburgh University and continuing as an apprentice at Royal Surgeons’ Hall. He was a practicing physician for several years, eventually moving to London in the early 1890s and becoming a full-time author.

Discover the academic, professional, and cultural influences that inspired Conan Doyle’s creation of Sherlock Holmes and his adventures: the professors who awakened his interest in observation and deduction, period-specific medical innovations, and Victorian London including its era of sensationalized crime. This section includes original and replica manuscripts, letters, illustrations, artifacts, and forensic specimens. 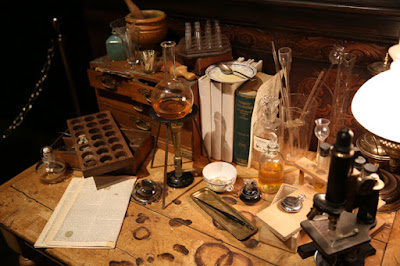 THE UNDERGROUND TRAIN STATION
Experience the bustle of Victorian London, circa 1895. Images of street urchins, traffic jams, scores of pedestrians, newspaper stands, and riverbanks full of commerce set the scene. In the Underground Station, you find yourself amid a center of innovation at an “International Science Exhibition.” 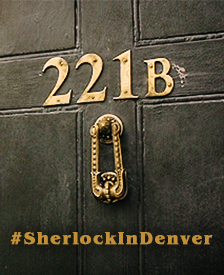 Here, you receive a “detective’s notebook,” the most important tool for recording your observations with special stamps and cutouts. Try experiments that demonstrate developments in science and technology emerging at the end of the 19th century. Delve into ballistics, forensics, printing, optics, botany, telecommunications, and other techniques for solving crimes that remain relevant today.

Stamp your notebook at the stations, and receive a coded message from Sherlock Holmes himself!

221B BAKER STREET
Enter Sherlock Holmes’s sitting room at 221B Baker Street, London, where Sherlock and Dr. Watson spent hours discussing cases. This scene looms large in popular imagination, ever since the first Sherlock tale, A Study in Scarlet, was published in 1887. Using your notebook as your guide, this is an opportunity to practice your powers of observation.
The room feels inhabited, as though Sherlock has just stepped out. Lit by a crackling fire, gaslights, and the flickering of a chemistry set’s Bunsen burners, the room’s clutter is almost overwhelming, though on closer inspection everything you see shows the hand of a brilliant eccentric among many objects from his recent cases.
At the end of your time in his study, you find that Sherlock needs your help to solve a mystery!
THE SCENE OF THE CRIME
The game is afoot! This new Sherlock case was written exclusively for the exhibition by Daniel Stashower, an award-winning Conan Doyle biographer.
Examine a crime scene in a Victorian-era home, and venture through the streets of London as you gather clues and analyze evidence at hands-on interactive stations. Use your detective’s notebook to emboss, stamp, rub, punch holes, and draw at the experiment stations to learn about poisonous plants, chemical reactions, ballistics, and how to interpret forensic evidence.
After gathering clues, use your notebook to unlock a final message from Sherlock!
THE SHED
Things are not always what they seem! Look closely at a garden shed that contains some unusual items, providing the final pieces of the puzzle before all is revealed.
THE SHERLOCK CULTURE
Enjoy a collection of “Sherlockian” items from pop culture, ranging from vintage card games, comics, and magazines, to radio scripts and movie and television show props and costumes, including from the recent Warner Bros. Sherlock Holmes films and the hit television shows Elementary and Sherlock, both of which set Sherlock Holmes in the present day.
HISTORICAL ENACTORS
Encounter Victorian-era characters portrayed by the Museum’s popular historical enactors.