Activists have occupied Berlin’s Volksbühne because of concerns that the “neoliberal” art world is taking over the legendary theater.
Dorian Batycka 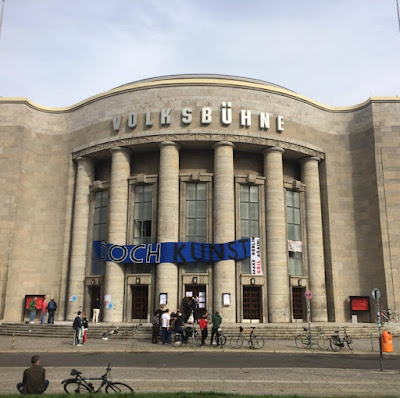 Berlin’s Volksbühne (photo by the author for Hyperallergic)

BERLIN — The controversy surrounding Berlin’s Volksbühne theater continues. On Friday, a group calling itself “Dust to Glitter” entered the Volksbühne declaring in a statement that the building is the “property of the people.” The action is the latest in an ongoing series of disruptions by a vocal coalition of artists and activists angry at what they see as the gentrification of the German capital’s cultural life.

Initially, hundreds of activists and artists associated with Dust to Glitter gathered in the storied theater’s main foyer to reclaim it as a space for public assembly. By nightfall, the group swelled to approximately 3,000 people as word got out about the occupation on social media.
“We are doing this action because rising rents are making it increasingly difficult for artists to live and work in Berlin,” Sarah Waterfeld, one of the group’s organizers, told Hyperallergic. She added that, by extension, the aims of the action were to transform the Volksbühne into an anti-gentrification center.
Dust for Glitter plans to develop a “People’s Stage” over the next three months as well as an “anti-gentrification center” and “parliament of the homeless.” Activists with Dust for Glitter plan on staging a production in the context of the occupation entitled “B61-12,” a title that refers to a nuclear bomb, calling the occupation a “transmedial and mimetic theatrical production.”
The Volksbühne, founded in 1890 and widely regarded as one of Berlin’s most important cultural institutions, was initially started to cater to a working-class audience. It owed much of its recent international reputation to the enigmatic former director Frank Castorf, who established over his 25 year career an experimental production style that demanded very high intensity and physically challenging performances.
Castrof was replaced last month by Chris Dercon, former chief of the Tate Modern, in a move many of Castrof’s supporters have criticized as symbolizing a different aesthetic and political alignment than Castorf had been cultivating. In June 2016, a group of about 200 people affiliated with the Volksbühne signed a letter protesting Dercon’s appointment and his plans to overhaul the theater. Dercon’s program this year includes new productions by Tino Sehgal, Mohammad Al Attar, and Arie Benjamin Meyers, among others.

According to Klaus Lederer, Berlin’s senator for cultural policy, who initially campaigned against Dercon’s appointment, describing it as a “mistake” that symbolizes a “neoliberal art scene and jet-setter attitude” imported to Berlin, has since come on record arguing that the city of Berlin needs to honor its contract with Dercon, and came out critical of the occupiers in a Facebook post yesterday. “The Volksbühne is a public house. It uses public funds to decide on direction […] you can criticize such decisions – which I have also done – you can think of such decisions […] but what is not progressive: preventing the direction from doing their work,” he said.
Dercon reportedly met with four small groups forming the coalition yesterday, protestors said in an interview with Hyperallergic. In an email response, the Volksbühne press office said that in the early Saturday morning talks between representatives of the People’s Stage, the cultural administration, the police, and the squatters were held, but so far no official word or response on the protesters specific demands.
And while the demonstration has so far been peaceful there is growing concern over the occupation and whether or not demonstrators will be forced to leave. For now, it seems the Volksbühne is willing to at least entertain negotiations with protesters, yet it remains to be seen under who’s terms and for how long city-officials will tolerate a squat in one of Berlin’s most celebrated cultural institutions.