PERFORMANCE. THE AUDACITY AND ABANDON OF PINA BAUSCH

In Café Müller and The Rite of Spring, currently playing as a double bill at the Brooklyn Academy of Music, Tanztheater Wuppertal offers up catharsis followed by brutal physicality.
Andrew Sargus Klein 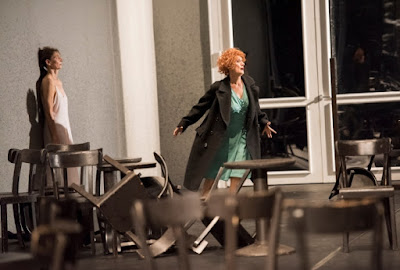 Tanztheater Wuppertal, Café Müller (1978), a piece by Pina Bausch with music by Henry Purcell, directed and choreographed by Pina Bausch (all photos by Stephanie Berger and courtesy the Brooklyn Academy of Music)
I didn’t notice the stage until I found my seat. The curtain was already raised, and I realized with a jolt I was looking at a deeply familiar array of simple black chairs and cafe tables, shrouded in black, with oversized glass doors on three sides of the space. This was the set for Café Müller, one of the late Pina Bausch’s iconic works made with the German dance company Tanztheater Wuppertal, and my heart disappeared briefly in anticipation.
I had seen those chairs countless times before — in photos, in the celebratory and eulogistic documentary Pina, and in grainy YouTube footage. I knew this set as if it were a known place in my life, a place I used to physically occupy.
The Brooklyn Academy of Music was crowded and restless at the opening weekend of Tanztheater Wuppertal’s double bill of Café Müller and The Rite of Spring, another Bausch masterpiece. Bausch first brought these works to BAM in 1984, which helped permanently cement her status in the modern dance world.
Bausch died in 2009 and was the subject of the aforementioned documentary in 2011, directed by Wim Wenders. The film introduced me and countless others to the genre of dance theater and its impossibly rich possibilities of movement and meaning-making.
Café Müller is a near perfect example of this genre, with its blend of the abstracted and expressive qualities of dance and the reality-based familiarity of theater. One of its earliest scenes has a woman making her way across the space with her eyes closed and arms out like she’s sleepwalking. A man frantically pulls chairs and tables out of her way as she aimlessly crisscrosses the floor. The element of danger — that she might truly hurt herself — isn’t as present tonight as it could be, but it quickly sets the terms for the work: the transformation of a pedestrian space with emotive and surreal imagery. 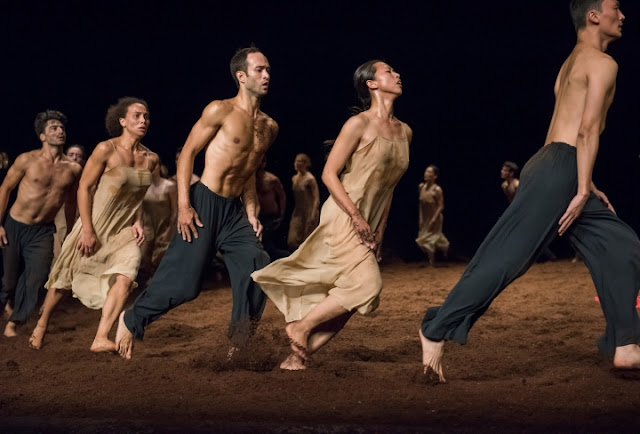 Tanztheater Wuppertal, Café Müller (1978), a piece by Pina Bausch with music by Henry Purcell, directed and choreographed by Pina Bausch (photo by Stephanie Berger, courtesy the Brooklyn Academy of Music)

The couple find each other in an embrace, and a second man appears in a dark suit. He slowly and mechanically adjusts their elbows and heads so that they kiss each other — their bodies pliable like dolls, heads unmoving, their lips simply resting against each other — and finishes the sequence by placing the woman in the first man’s arms. He makes to exit, but the woman falls to ground and, with a quick jump and spin, stands and wraps her arms tight around her partner. The man in the dark suit returns and goes through the same cycle only for her to fall and re-embrace again and again.
The timing is drawn out, and a large part of the audience the night I attended laughed with the tension, but it resonated with me as it always had on screen — as a drawn out sequence of power and trust, hope and control, two bodies manipulated and magnetized. Before you realize it, the pace is such that all three bodies are a blur of limbs and long brown hair and breath. The effect is something uniquely human, soaring, and visceral. The third man leaves the space but the two continue the sequence without him with a frantic, desperate energy.
I’m describing this sequence in as fine detail as I can because it’s representative of the sort of profound and accessible magic of Bauch’s art. Café Müller continues with scenes of similar imagination and effect. A second woman stays near the back of the stage for almost the entire duration of the piece, but when the emphasis switches to her she primarily solos with a specific vocabulary of outstretched limbs that move away and toward her body with the naturalness of breath. Her fluidity is stark as she glides, ghost-like, in a room of sharp and lifeless angles.
This isolated figure is the role that Bausch herself traditionally danced. There is something to the simplicity of the role — a simplicity that only amplifies its expressivity — that speaks to how profound Bausch was as a performer and creator. The wandering with outstretched arms is breathtakingly vulnerable, and I can’t imagine how difficult it is to attempt to fill her shoes………

The climax is an extended solo by the woman eventually chosen to be sacrificed. As in the original, she dances herself to death. But instead of the trembling knees, the internal rotation, the jumping, and angular pose of the arms that were so revolutionary in 1913, this is an unrelenting lament. She frantically moves side to side across the space, diving to the ground, beating her chest, stopping, starting, unsure, wild, unbound, defeated. It’s an utterly mesmerizing crescendo. Time slips its hold, there is only this final moment before death. When death comes, it brings the roar of the audience. 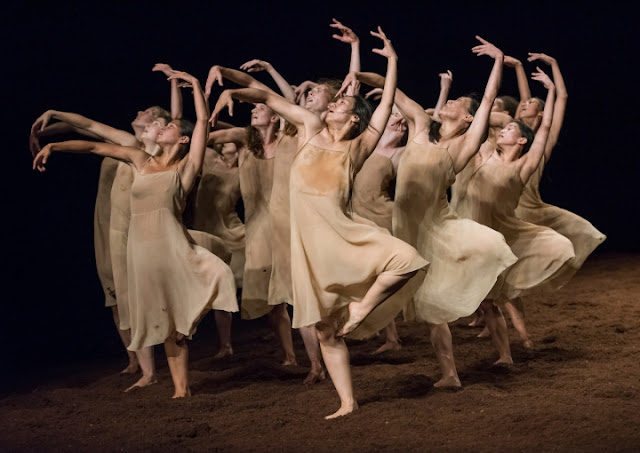 Tanztheater Wuppertal, The Rite of Spring (1975), music by Igor Stravinsky, directed and choreographed by Pina Bausch