The Garden Museum in London has reopened, showcase a recreation of a 17th-century curiosity cabinet, horticultural art, and the tombs of the deconsecrated church in which it’s located.
Allison Meier 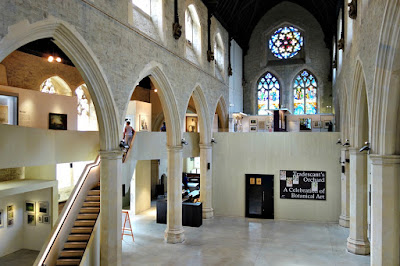 LONDON — Not many museums discover the graves of five archbishops during their renovations, but the Garden Museum overlooking the River Thames is unique. Not only is it the world’s first museum of garden history, it’s housed in a deconsecrated church. From the 11th century to 1854, more than 20,000 people were buried inside St Mary-at-Lambeth and in the surrounding churchyard. So when Dow Jones Architects redesigned the interior — newly reopened this May — they couldn’t touch the historic walls or disturb these graves. New galleries and spaces from the 18-month redevelopment are lofted and divided with prefabricated timber, which allows natural light to stream in through the stained glass windows.

While the revamp works around the building’s heritage, it doesn’t ignore it. Memorial plaques in the nave and tombs embedded on the floor are visible alongside the exhibitions of antique gardening implements, contemporary art, lawn ornaments, and a freestanding shed — in which you can watch videos about sheds. At several different stations, visitors can listen to recreations of the voices of the interred dead, including Elias Ashmole, of the Ashmolean Museum in Oxford. A founding collection of that museum involved objects from The Ark, opened to the public by the 17th-century gardener John Tradescant, who also rests at the Garden Museum. Tradescant’s elaborate tomb is prominent in the lush, new Sackler Garden by designer Dan Pearson, with pyramids, a hydra, and other carvings on its four sides……