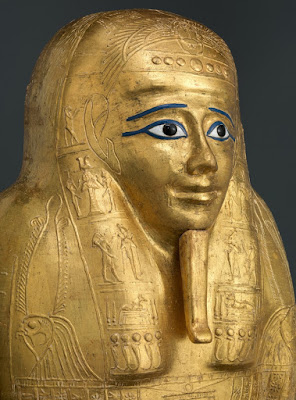 Detail of a gilded coffin lid for the Priest Nedjemankh (late Ptolemaic Period, 150-50 BCE) (all images © the Metropolitan Museum of Art, New York)

The Metropolitan Museum of Art has added some serious bling to its ancient Egyptian collection in the form of a rare, gilded coffin with a highly ornamental lid.
Dating to the late Ptolemaic period, the mummiform coffin was inscribed for the high-ranking priest Nedjemankh, who was part of the cult of the ram-god Heryshef of Herakleopolis. Its gold-sheathed surface portrays scenes and texts in thick gesso relief that served to protect the deceased as he ventured into the afterlife. Its interior, too, is decorated, featuring a unique detail: thin sheets of silver foil intended to protect the priest’s face.

Originally exported from Egypt in 1971, the coffin emerges from a private collection and is now a one-of-a-kind object in the Met’s own holdings.
“Although fully gilded coffins from Egypt are attested over a period of more than 1,500 years, they are extremely rare, and the Met owns no other examples,” a member of the museum’s Egyptian Art Department told Hyperallergic. “The coffin of Nedjemankh is distinctive within the collection both for its materials … and the technique of gesso pastiglia used to create the decoration. It also fills a gap in the museum’s collection of coffins between earlier Ptolemaic examples and later Roman ones.”
Besides serving as protection, the precious metals would have represented the eyes of the deity Heryshef (whom Nedjemankh served), according to the museum. The long inscription on the coffin’s lid also explicitly ties gold to the flesh of the gods, the sun, as well as the reincarnation of the deceased. Gold and silver generally carried such symbolism for the ancient Egyptian, but to see this association laid out in an inscription is rare.
And you can observe it for yourself the next time you’re at the Met, as the gleaming coffin is now on view in the museum’s Lila Acheson Wallace Galleries for Egyptian Art.