A petition is calling for the removal of three works, including an installation of live lizards and insects and a video of a performance involving pit bulls running on treadmills, from the forthcoming Art and China After 1989.
Benjamin Sutton
Huang Yong Ping, “Theater of the World” (1993), wood and metal structure with warming lamps, electric cable, insects (spiders, scorpions, crickets, cockroaches, black beetles, stick insects, centipedes), lizards, toads, and snakes, 150 x 270 x 160 cm, Guggenheim Abu Dhabi (© Huang Yong Ping)
Protesters are calling on the Guggenheim Museum to exclude three works slated to be featured in its forthcoming exhibition Art and China after 1989: Theater of the World over the artists’ treatment of animals.
The most prominent target of the objections, articulated in a Change.org petition addressed to the Guggenheim — which, as of this writing, has accrued over 42,000 signatures — is “Dogs Which Cannot Touch Each Other,” a video by the artist duo Peng Yu and Sun Yuan. It documents a 2003 performance in which four pairs of pit bulls faced each other on treadmills, running at each other but stuck in place by harnesses and the treadmills underfoot. 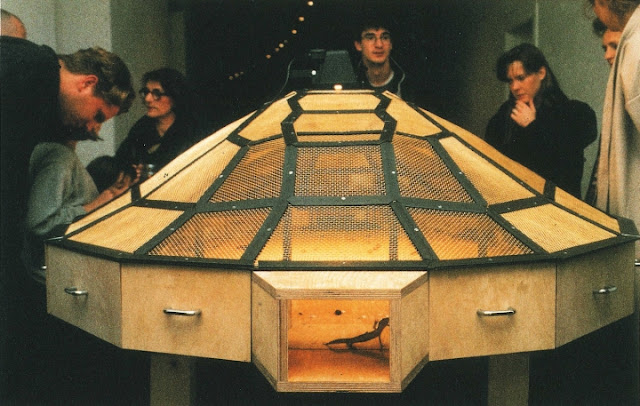 “Reflecting the artistic and political context of its time and place, ‘Dogs That Cannot Touch Each Other’ is an intentionally challenging and provocative artwork that seeks to examine and critique systems of power and control,” the Guggenheim said in a statement defending the work. “We recognize that the work may be upsetting. The curators of the exhibition hope that viewers will consider why the artists produced it and what they may be saying about the social conditions of globalization and the complex nature of the world we share.”

In a recent interview with the scholar Paul Gladston (and cited by the New York Times), Peng anticipated the allegations of animal abuse that “Dogs That Cannot Touch Each Other” might elicit and dismissed them.

“Were the dogs being abused? The answer should be no,” Peng said. “These dogs are naturally pugnacious. We only separated them and let them run on the treadmill, which became a sport for the dogs. For those who consider this animal abuse, I don’t understand what they are protesting about.”

One of the two other pieces cited in the petition is the exhibition’s titular work, Huang Yong Ping’s “Theater of the World” (1993), which consists of a wood, steel, and mesh structure inhabited by reptiles and insects that will eat each other and die (and occasionally be replenished) over the course of the exhibition. In a statement sent to Hyperallergic, a spokesperson for the Guggenheim explained the measures taken to ensure the safety and ethical treatment of the insects and reptiles included in “Theater of the World”:

The final work the petition’s author, one Stephanie Lewis, singles out for its treatment of animals is a video of Xu Bing’s 1994 piece “A Case Study in Transference,” which involved two pigs whose bodies were covered in stamped text living in a pen inside a Beijing museum.

“Let [the Guggenheim] know that animal cruelty holds no place in art in the United States, nor should it anywhere in the world,” the petition concludes. “This assault on animals in the name of art will not be tolerated or supported.”

Art and China after 1989: Theater of the World is due to open at the Guggenheim in New York on October 6. As of this writing, all three pieces mentioned in the petition will be included. Artists’ incorporation of live animals into their works has become an increasingly contentious issue in recent years, sparking protests of projects by Damien Hirst, Cai Guo-Qiang, Jannis Kounellis, and Hermann Nitsch, among others. The most infamous offender, however, remains Tom Otterness, who shot and killed a dog in his 1977 piece “Shot Dog Film.”

Editor’s note: An earlier version of this post claimed that the pigs featured in Xu Bing’s installation “A Case Study in Transference” were tattooed with text, but they were actually stamped. This error has been fixed and we apologize for any confusion it may have caused.