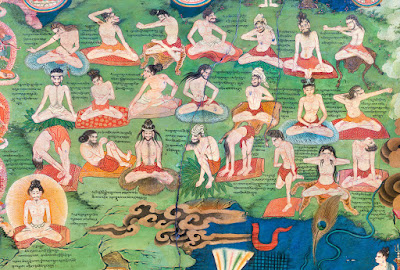 A detail from the murals in the Dalai Lamas’ private meditation chapel, painted circa 1700, depicting yogis in 23 yoga positions, titled “The Secret Keys of the Channels and Winds.” (all images courtesy of Thomas Laird and the Wellcome Collection and used with permission)

On an island in a pond behind the Potala Palace in Lhasa, Tibet sits the Lukhang Temple, or “Temple to the Serpent Spirits,” a secret meditation space created by the Dalai Lama in the 17th century. For hundreds of years, this temple was closed to anyone but the Dalai Lama himself. Vibrant murals covered its walls, depicting yogis in impossible-looking poses, gurus and kings, crystals surrounded by rainbows, and the vagina that gave birth to the world. Used to initiate Dalai Lamas into yogic and tantric practices in the Dzogchen school of Tibetan Buddhism, very few got to see these murals.

Now, though, images of these long-hidden murals are accessible the world over, thanks to American photographer Thomas Laird, who in the spring of 1986 was the first to ever shoot inside this sacred chamber. A new exhibit at London’s Wellcome Collection, Tibet’s Secret Temple: Body, Mind and Meditation in Tantric Buddhism, puts life-size digital facsimiles of the Lukhang’s murals and their esoteric teachings on display. The temple itself was constructed as a three-dimensional mandala, a sacred geometrical shape representing the Buddhist universe, with three tiers represent the three dimensions of enlightenment — outer reality, inner experience, and a transcendent dimension beyond time and space. 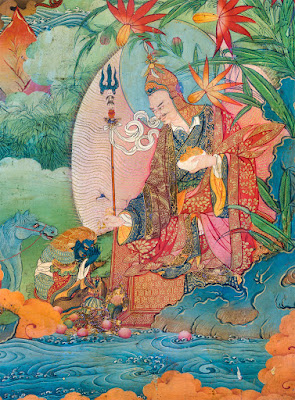 A detail from the murals in the Dalai Lamas’ private meditation chapel, painted circa 1700, depicting Guru Rinpoche or Padmasambhava accepting obeisance after he has subjugated the Lu King, or Naga King (a serpent spirit).

“Despite its being a visual repository of Tibet’s most esoteric spiritual teachings, the Lukhang temple is not well known even to those who have travelled frequently to Tibet or who study its Tantric Buddhist traditions,” Ian Baker, exhibition co-curator and a scholar of Tibetan Buddhism, tells Hyperallergic. Even the few who do know about the windowless, isolated Lukhang and manage to see its murals in their original location won’t get as detailed a view as Laird’s digital facsimiles offer. “The original murals have become increasingly damaged by successive varnish veneers and are now encased in aluminium framed glass panels,” Baker explains. “The chamber is very underlit and, unless one brings a flashlight, it’s hard to see the intricate detail.”
Laird captured thousands of individual frames of each mural, then created life-size digital facsimiles on lightboxes, some as big as 10×30 feet (~3×9.1m). The Wellcome exhibition also includes 120 objects associated with Tibetan Buddhism, including scroll paintings, statues, and manuscripts. 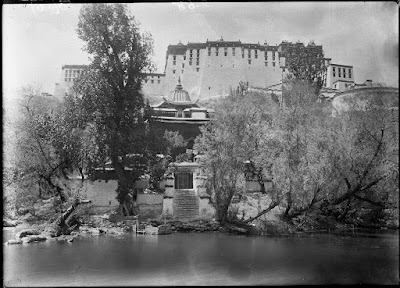 The Lukhang Temple, with Potala Palace in the background

The murals reveal a dimension of Tibetan Buddhist practice that directly opposes the monastic traditions most people associate with Tibet. They celebrate Tibet’s non-monastic Tantric and yogic practices, which were long kept secret. “But as His Holiness the Dalai Lama said to me when the issue of publicizing images of the Lukhang first arose: ‘The time of secrecy is over and is not relevant in western society. Unless these practices become better known they will be completely lost. That would be a great tragedy,’” Baker says. “Generally, the Lukhang’s guardian monks have been very supportive of our efforts to document the murals and to share these images with the outside world.”
The visionary Tibetan behind the creation of the murals — Desi Sangye Gyamtso, then the political regent of the Fifth Dalai Lama and discoverer of the Sixth Dalai Lama — was renowned for preserving the highest achievements of Tibetan civilization, whether in art, medicine, or spiritual practice. “I think he would be pleased that conditions in the world have advanced to the point where such teachings can now be openly represented without fear of censure,” Baker says. “That was unfortunately not the case in Tibet during his own lifetime, as he was summarily beheaded under the orders of a rival political leader. As for the murals now being displayed in a museum, I think he would recognize the spirit that museums embody in their very etymology as ‘places of the muses’ — The Lukhang temple performed a similar role as a place for inspiration.” 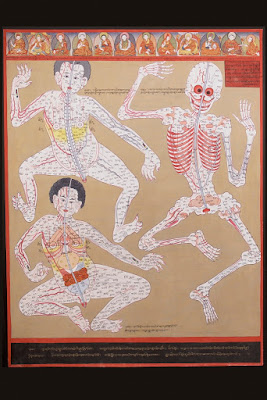