The two murals in central London appeared just before the opening of a major Basquiat exhibition at the Barbican Centre.
Benjamin Sutton 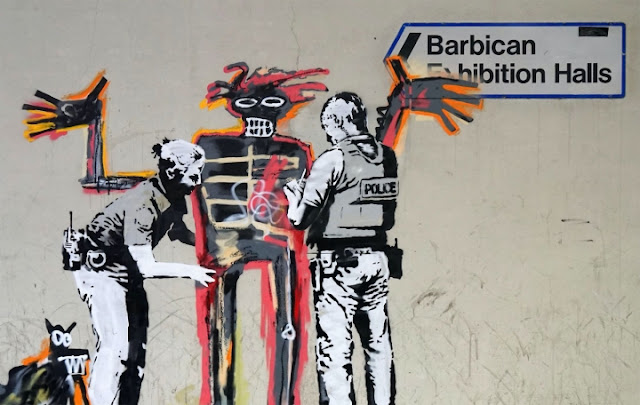 Banksy mural near the Barbican Centre (via banksy.co.uk)
On Sunday, two new murals by Banksy riffing on the work of Jean-Michel Basquiat appeared in central London on a street near the Barbican Centre, which is about to open a major Basquiat exhibition. The secretive British street artist’s two works in Golden Lane include a reinterpretation of Basquiat’s 1982 painting “Boy and Dog in a Johnnypump” that is also a jab at the Metropolitan Police’s institutional racism problem.

“Portrait of Basquiat being welcomed by the Metropolitan Police,” Banksy captioned an image of the mural on Instagram, “an (unofficial) collaboration with the new Basquiat show.” An untitled Basquiat painting from the same year as “Boy and Dog in a Johnnypump” recently sold for $110.5 million at auction, a record for a US artist.
The other new Banksy mural features a queue of people waiting to ride a ferris wheel whose compartments are crowns rendered in Basquiat’s signature style. “Major new Basquiat show opens at the Barbican,” Banksy captioned the image on Instagram, “a place that is normally very keen to clean any graffiti from its walls.”

The new murals coincide with the opening on Thursday of Basquiat: Boom for Real at the Barbican Centre, the artist’s first major exhibition in the UK. Though Basquiat died when he was just 27, many cite his work as a street artist — scrawling the distinctive “SAMO” tag, often accompanied by short poems, on buildings in Lower Manhattan — as a key component in the development of his Neo-Expressionist painting style.

The Basquiat-inspired murals continue a recent flurry of activity from Banksy, who last week donated £205,000 (~$277,000) from the sale of his latest indoor piece at an anti-arms fair exhibition to charities. He also recently revealed plans to open a gift shop selling original works alongside his Walled Off Hotel in the occupied Palestinian territories sometime this fall.