10 THINGS TO KNOW ABOUT PAUL DELVAUX

The Belgian painter filled his canvases with puzzling night-time scenes of skeletons, train stations and naked women, yet distanced himself from Surrealism and Freudian interpretation. Illustrated with past and present works offered by Christie’s 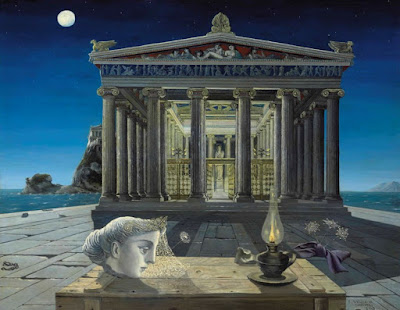 1 An early training in draughtsmanship informed much of his work
Paul Delvaux (1897-1994) was born in Wanze in southern Belgium. While his parents hoped he would follow in his father’s footsteps and pursue a legal career, his aunt encouraged his leanings towards literature and music. A compromise was reached, and the young Delvaux was allowed to study architecture. To his parents’ dismay — but Delvaux’s relief — he failed his mathematics exam. But his grounding in classical architecture and perspective provided him with a skilled hand for draughtsmanship, as is clear in works such as Le temple, below, sold at Christie’s in London in 2012 for £1,609,250.
2 Following severe criticism, he destroyed many early works
After enrolling at the Académie Royale des Beaux-Arts in Brussels to study painting, Delvaux finally graduated at the age of 27. It took almost three more years before he felt confident enough to set up his own studio in his parents’ Brussels home.

It wasn’t until the diffident artist’s mother died in 1933, when he was in his mid-thirties, that he felt comfortable exhibiting his painting of a sleeping Venus, inspired by a mechanical model he had spotted in a wax museum. It was a theme to which he would return again and again; the work, however, was severely criticised, and Delvaux destroyed the image, along with many other paintings from the period. 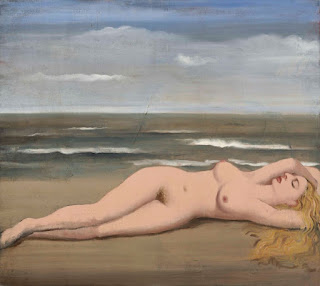 3 He revisited the experiences of his youth, many times over
The majority of Delvaux’s motifs were inspired by adolescent experiences: encountering the grinning skull of a man’s skeleton at school; discovering the poetry of Homer; taking the train to the Sonian Forest near Brussels to paint en plein air  while on military service. The artist once said of these icons: ‘Youthful impressions, fixed once and for all in the mind, influence you all your life.’………………….