IN ENGLAND AND GERMANY: EGON SCHIELE IS STILL TOO RACY FOR SOME, NEARLY 100 YEARS AFTER HIS DEATH

A series of advertisements showing Schiele’s graphically contorted bodies (with explicitly rendered private parts) didn’t make it past the critical eyes of those selling advertising space in Britain and Germany — nor the anti-nudity restrictions on Facebook. The artworks had to be covered up.
Both Schiele and his mentor, the painter Gustav Klimt, died in 1918, the same year World War I and the Austro-Hungarian empire ended. In 2018, museums in Vienna will mount a yearlong series of exhibitions and events to mark the centennial: “Stairway to Klimt” begins at Vienna’s Kunsthistorisches Museum on Feb. 13; “Egon Schiele, Expression and Lyricism” opens at the Leopold Museum on Feb. 23. 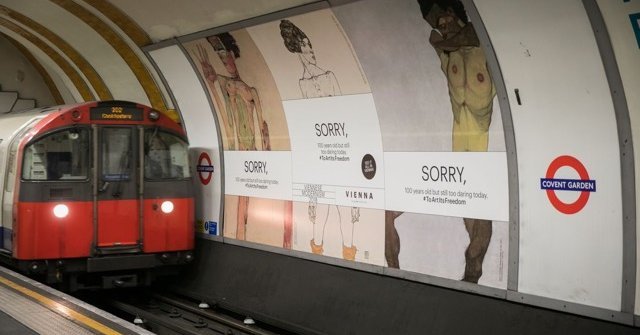 Vienna’s Tourist Board has also been working on a campaign celebrating these and other big-draw exhibitions, and Viennese modernism in general. But the campaign ran into an unusual glitch — the office’s originally planned posters, featuring large Schiele nudes, turned out to be too racy.
According to a Vienna Tourist Board spokeswoman, Helena Hartlauer, Transport for London rejected the original images, citing trepidation about depicting genitals in public space.
Ms. Hartlauer said that modified advertisements with pixelated genitals were also declined. Ultimately approved were versions using the same artworks (Schiele’s “Seated Male Nude (Self-Portrait),” 1910, and “Girl With Orange Stockings,” 1914, and other paintings by the artist, all from the Leopold Museum collection), but with certain bits covered by a banner.
The banner reads: “SORRY, 100 years old but still too daring today.” The modified images are now on view on bus shelters in Cologne and building facades in Hamburg, and, since this week, in tube stops in London.
“We wondered, How much Viennese modernism is bearable today?” said Norbert Kettner, chief executive of the Vienna Tourist Board. Apparently for the British and Germans, less than the Austrians anticipated.
In some ways, the no-nude attitudes abroad have been a blessing in disguise for Vienna’s campaign — since early November the Tourist Board has been highlighting images of the public ads with the hashtag #DerKunstihreFreiheit (#ToArtItsFreedom in English) on social media.
The hashtag comes from the slogan “To every age its art, to art its freedom,” still visible in German on the facade of the Viennese Secession, an exhibition venue co-founded by Klimt in 1897 and still operating today as an autonomous artist-run institution. And the controversy certainly echoes discussions that took place in Schiele’s time. In fin-de-siècle Vienna, an era of dramatic shifts in both art and society, many considered the artist’s work to be pornographic. Schiele’s first broader acceptance didn’t come until early 1918 with a major exhibition in the Secession — later that year, the artist succumbed to Spanish flu at age 28.

“We want to show people just how far ahead of their time Vienna and its protagonists really were,” Mr. Kettner said. “And also encourage the audience to scrutinize how much really has — or hasn’t — changed in terms of openness and attitudes in society over the times.”