THE SOMBER FATE OF A MANUSCRIPT ILLUMINATOR. IN WRITTEN ON SKIN, CURRENTLY PLAYING AT OPERA PHILADELPHIA, AN ILLUMINATED MANUSCRIPT ARTIST GETS INVOLVED WITH HIS PATRON’S WIFE.

ne of the most extraordinary operas of the 21st century is playing at Opera Philadelphia. Our journey from New York to see George Benjamin and Martin Crimp’s Written on Skin — the title refers to the parchment on which medieval manuscripts were illuminated — was worth every yard.

The plot, based on the 13th-century vida of troubadour Guillem de Cabestany, begins with a chorus of angels — here costumed in black and pacing with stage-manager airs, futuristic electronic tablets in hand — who turn time back to the medieval period. We meet a wealthy, violent landowner, the Protector, and his wife, Agnès. The Protector, who calls Agnès his “property” (already the opera’s critical stance on traditional gender roles is clear), commissions an artist known simply as the Boy to prepare an illuminated manuscript based on the life of the Protector’s family. But the commission requires an almost hagiographical slant: he asks the Boy to depict himself and his family in paradise and his enemies in hell.
gnès asks the Boy to portray a woman “who said that she couldn’t sleep / who said that her heart split and shook / at the sight of a Boy.” When he brings her the finished product, clearly depicting her tangled up in a bedsheet, they discuss the picture’s verisimilitude until she seduces him. The Boy lies when the Protector confronts him about his suspicions, but Agnès demands that the Boy invent an image that will shatter her husband’s delusions of grandeur: “While the dead heap up in the meadow / while human beings burn in the marketplace, / make a new page: / Push our love into that man’s eye / like a hot needle.” After the Boy confirms the truth through text and images, the Protector murders him and feeds his heart to Agnès, who remains defiant to the end. 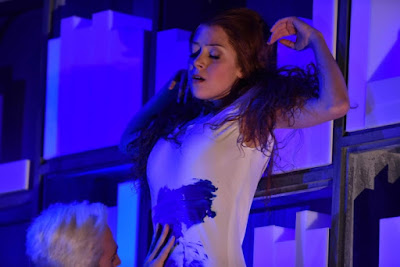 The piece is a terrific feat of harmony and orchestration. The singers are given sonic space to soar above the orchestra’s playing, most of which does not double the vocal lines. Each sentence is perfectly clear, even when multiple characters are singing different lines of text. Opera singing in English can often sound muddled because our language, with its abundance of diphthongs and schwa vowels, does not lend itself naturally to sustained notes. For this reason, even Anglophone listeners hearing a piece in their own language often find it helpful to read supertitles at the opera house. But in this production, we found ourselves in the unusual situation of not needing the titles at all...................