‘A CIRCUS IS DISTURBING. IT IS PROFOUND’ — THE FANTASY WORLDS OF MARC CHAGALL’S LE CIRQUE 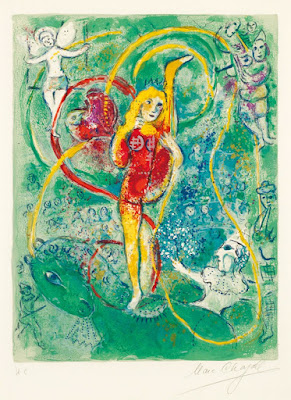 The spectacle of the circus and its performers had fascinated Chagall (1887-1985) from his childhood days in Vitebsk, Russia, where travelling acrobats and equestrians often came to entertain crowds at village fairs. Chagall never forgot an incident when, as a young man, he had looked on as a father and his children performed clumsy but strenuous acrobatic stunts on the street. The passing public deemed their efforts more pathetic than laudable, and Chagall watched as they walked away, unappreciated and empty-handed. Then, as at other times during his career, Chagall must have feared that this might be the fate of anyone who sought for himself the life of an artist………………………