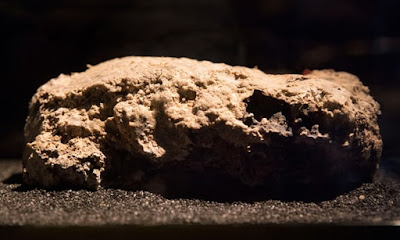 There are no guidelines for museums working with sewage, admitted the museum curator. Photograph: Alicia Canter for the Guardian

Its aroma was once a mix of rotting meat and a toddler’s nappy that had been left out for months, but it has now, mercifully, calmed down.

“At the moment it smells like dirty toilets,” said Sharon Robinson-Calver, who has led the conservation team at the Museum of London for one of its most challenging and unusual projects.

The museum will on Friday unveil a display of the last remaining piece of a monster fatberg discovered last September in sewers under Whitechapel.

London’s fatberg on show: ‘We thought of pickling it’
Read more
It has been slowly air dried. While visitors will not be able to smell it they might get to see a drain fly, given that there is larvae still in the sample.

“They seem quite happy,” said Robinson-Calver. “They’ve got a good food source. They pop out and fly around from time to time, which will be fascinating for visitors. It is part of the mystery of the fatberg, it’s the gift that keeps on giving.”

The sample was part of a sewer-blocking fatberg that made headlines last year, weighing 130 tonnes, the equivalent of 11 double decker buses and stretching more than 250 metres, six metres longer than Tower Bridge.

The solid calcified mass of fats, oils, faeces, wet wipes and sanitary products tells us something about how we live.

“Here at the museum we are all about reflecting the real lived experience of Londoners and it is part of our season exploring the highs and lows of London city life,” said Vyki Sparkes, the curator of social and working history. “I don’t think you can get much lower than a fatberg.”
She said it was like a “black mirror … it reflects the dark side of ourselves”. 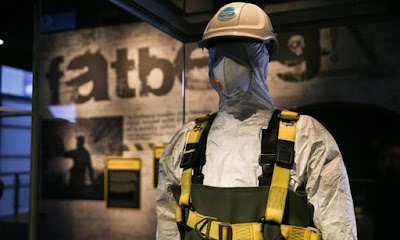 There are two cases of fatberg samples on display. One sample has crumbled into what resemble large truffles. The other is the size of a shoebox and is more intact because it was dried more slowly. It has an other-worldy look; it could be a piece of moon rock or debris from a meteor. Its alien nature is heightened by a strange purple and orange tag.

Curators and conservators have had to learn new skills to put the sample on display, choosing drying rather than pickling or freezing. “There are no guidelines for museums to work with sewage,” admitted Sparkes. “Nobody has conserved one of these before. We don’t really know how it is going to behave over the long term.”

The Whitechapel fatberg was a colossal thing, giving off hydrogen sulphide and carbon monoxide, both toxic and flammable gases, and some visitors may be disappointed that the sample is not bigger.

Sparkes said a larger piece would have been impossible. It had to be blasted off using high-powered jet hoses, carried through the sewer and lifted through a small manhole. “To be honest, I’m hoping people will come, realise the amount of work and the risks and be amazed that there is any of it.”

The display also tells a more positive story, revealing that fatbergs can and have been converted into biodiesel, and is one of the fuels powering the No 24 London bus route between Pimlico and Hampstead.
Sparkes admitted that the display may not be for all tastes. “Not everyone will want to come to see the fatberg, it will be too disgusting, too gross to think about,” she said.

It has been deliberately put in a sewer-dark room that people can choose to enter or not. Either way, the museum is expecting lots of interest and has come up with fatberg merchandise, including T-shirts, tote bags and badges.

There is also fatberg fudge – quite crumbly, with a piquant rum and raisin flavour.