IN EDO JAPAN, ARTISTS CAPTURED WHALES LIKE NEVER BEFORE

The whaling industry was an important economic force in both the United States and Japan, but each society captured the subject matter very differently in art.
Claire Voon 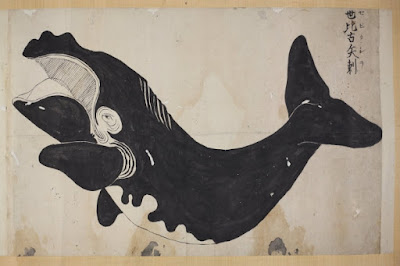 In June of 1798, a 55-foot-long humpback whale drifted into Edo’s Shinagawa Bay, drawing crowds to the beach to marvel at the trapped cetacean. Naturally, the rare occasion drew artists, too. They immortalized the event in woodblock prints and watercolor scrolls, and the images proved so popular that versions were produced and disseminated over the following decades. One particularly lively scene was rendered by Katsukawa Shuntei, who painted boats filled with revelers enjoying sake on rolling waves, watched from the shore by elegantly dressed courtesans. Curiously, while Shuntei likely witnessed the event firsthand, he took great creative liberty with his visual account, recording not one whale, but two.
His print exemplifies traditional Japanese whaling as a cultural phenomenon that engaged the entire village communities. This ancient proverb, often appearing on prints, speaks to the significance of a successful whale hunt: “One whale makes seven villages prosperous.” 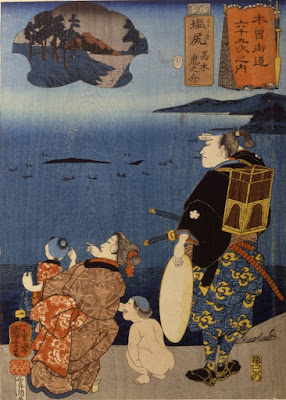 The importance of whaling to the local economy and cultural traditions is evident in companion exhibitions at the New Bedford Whaling Museum, Enlightened Encounters: The Two Nations of Manjiro Nakahama and The East Unlocks its Gates: American Whalers and Trade in Asia. Together, they explore Japanese whaling culture in the first half of the 19th-century as it was contemporaneous to the burgeoning American whale fishery. Manjiro Nakahama, a Japanese whaler who spent a decade working in the American industry before returning home, serves as a focal point of this joint history; he played a pivotal role in building relations between the two countries, serving as a translator and whaler with knowledge of both whaling cultures.

The exhibitions feature images of American whalers such as Captain Mercator Cooper, the first American to formally visit Edo; letters Manjiro sent to Americans; logbooks; and Japanese objects acquired by Cooper. It’s the prints of Japanese shore whaling from the 1820s to 1840s, however, that stand out most, for their dynamic and evocative scenes. They contrast starkly with artworks that depict Yankee whaling, and the differences are telling……………