21 February – 22 June 2014
Garden of the East: photography in Indonesia 1850s–1940s offers the chance to see images from the last century of colonial rule in the former Dutch East Indies. It includes over two hundred photographs, albums and illustrated books from the Gallery's extensive collection of photographic art from our nearest Asian neighbour.

Most of the daguerreotype images from the 1840s, the first decade of photography in Indonesia, are lost and can only be glimpsed in reproductions in books and magazines of the mid nineteenth century. It was not until the late 1850s that photographic images of Indonesia – famed origin of exotic spices much desired in the West – began circulating worldwide. British photographers Walter Woodbury and James Page, who arrived in Batavia (Jakarta) from Australia in 1857, established the first studio to disseminate large numbers of views of the country's lush tropical landscapes and fruits, bustling port cities, indigenous people, exotic dancers, sultans and the then still poorly known Buddhist and Hindu Javanese antiquities of Central Java.
The studios established in the 1870s tended to offer a similar inventory of products, mostly for the resident Europeans, tourists and international markets. The only Javanese photographer of note was Kassian Céphas who began work for the Sultan in Yogyakarta in the early 1870s. In late life, Céphas was widely honoured for his record of Javanese antiquities and Kraton performances, and his full genius can be seen in Garden of the East. 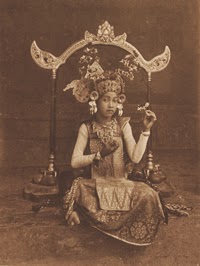 Most of the best known studios at the turn of the century, including those of Armenian O Kurkdjian and German CJ Kleingrothe, were owned and run by Europeans. Chinese-run studios appeared in the 1890s but concentrated on portraiture. Curiously, relatively few photographers in Indonesia were Dutch.
From the 1890s onward, the largest studios increasingly served corporate customers in documenting the massive scale of agribusiness, particularly in the golden economic years of the Indies in the early to mid twentieth century.
From around 1900, a trend toward more picturesque views and sympathetic portrayals of indigenous people appeared. This was intimately linked to a government sponsored tourist bureau and to styles of pictorialist art photography that had just emerged as an international movement in Europe and America. As photographic studios passed from owner to owner, old images were given new life as souvenir prints sold at hotels and resorts and as reproductions in cruise-ship brochures.
Amateur camera clubs and pictorialist photography salons common in Western countries by the 1920s were slower to develop in Asia and largely date to the postwar era. Locals, however, took up elements of art photography. Professionals George Lewis and Thilly Weissenborn (the only woman known from the period) and amateurs Dr Gregor Krause and Arthur de Carvalho put their names on their prints and employed the moody effects and storytelling scenarios of pictorialist photography.