ENLIGHTENMENT AND BEAUTY: SCULPTURES BY HOUDON AND CLODION

Jean-Antoine Houdon (1741–1828) and Claude Michel, called Clodion (1738–1814), were two of the foremost sculptors in France during the late eighteenth century, and the Frick houses an important group of their works. In 1915, founder Henry Clay Frick acquired Clodion’s terracotta Zephyrus and Flora and, the following year, Houdon’s marble bust of the Comtesse du Cayla. Other works that were subsequently added to the collection will be shown together for the first time, highlighting the artists’ expressive ranges, as well as their defining contributions to the sculpture of Enlightenment-era France. 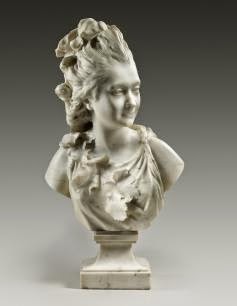 Displayed in the brilliant natural light of the Frick’s Portico Gallery, exquisitely carved, lifelike marble portraits by Houdon and virtuoso terracotta figures and reliefs by Clodion will epitomize each artist’s best-known achievements. Important examples from New York–area private collections will complement the Frick’s sculptures and introduce other aspects of the artists’ oeuvres not represented at the museum. The ensemble will illustrate the beauty, naturalism, and classical motifs that connect the works of both artists, who were fellow students in Rome, while also drawing attention to their respective goals and sensibilities as the dominant French sculptors of their day.
The exhibition is organized by Denise Allen, Curator, and Katie Steiner, Curatorial Assistant, with Alyse Muller, Ayesha Bulchandani-Mathrani Curatorial Intern.