VIENNA. DÜRER, MICHELANGELO, RUBENS - THE 100 MASTERWORKS OF THE ALBERTINA 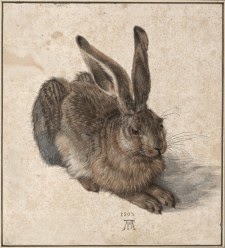 The exhibit Dürer, Michelangelo, Rubens - The 100 Masterworks of the Albertina for the first time shows around 100 top-class masterpieces from the collection of the Albertina in the context of the chequered and exciting life story of its founders, Prince Albert of Saxony, Duke of Teschen and Archduchess Marie Christine. The large-scale presentation unites the highlights of the collection, from Michelangelo through Rembrandt and Rubens to Caspar David Friedrich. The centrepiece of the Albertina, Dürer's famous "Young Hare", is now once again accessible to an interested public in the context of this exhibit after a decade-long period of grace.

The time span documented by the large-scale exhibit extends from 1738 to 1822: from the age of the courtly Baroque under Maria Theresia and the Enlightenment under Joseph II, through the premodern period and the years of the revolutions in America and Europe to the Biedermeier period of the Vormärz (the years leading up to the revolutions of 1848 in Germany) following the Vienna Congress.  The stations in life of the founders of the collection, Prince Albert of Saxony, Duke of Teschen and Archduchess Marie Christine, including Dresden, Rome, Paris, Brussels and Vienna, present the leading centres of art and politics, and in the process provide insight into the multi-layered networks of collectors and art dealers, the feudal life of the European aristocracy, as well as the political and intellectual reorientation under the auspices of the Enlightenment.

Loans from throughout the world supplement the holdings of the Albertina in this presentation and convey a poignant picture of the circumstances and the passion for collecting of the namesake of the Albertina. A splendid service, as well as paintings and busts of the Duke and his wife, but also other important documents of the time, such as the hat of Napoleon, worn by him at the Battle of Eylau, originate from, among other sources, the Metropolitan Museum of Art, the Louvre, the Staatliche Kunstsammlungen Dresden, the Vatican and various private collections.