Jacqui Palumbo
Nearly two decades ago, Paul Budnitz was walking through Tokyo’s Harajuku district when he spotted a long line of Japanese youth waiting to enter a tiny gothic clothing store called Bounty Hunter. The shop was owned by streetwear designer Hikaru Iwanaga and sold small plastic toys, inspired by the trinkets found in cereal boxes, that could only be obtained by purchasing clothing from his boutique. The coveted toy, known as Kid Hunter, was a mischievous pirate figurine, a riff on the American cereal icon Cap’n Crunch—and you had to be in the know to get one. 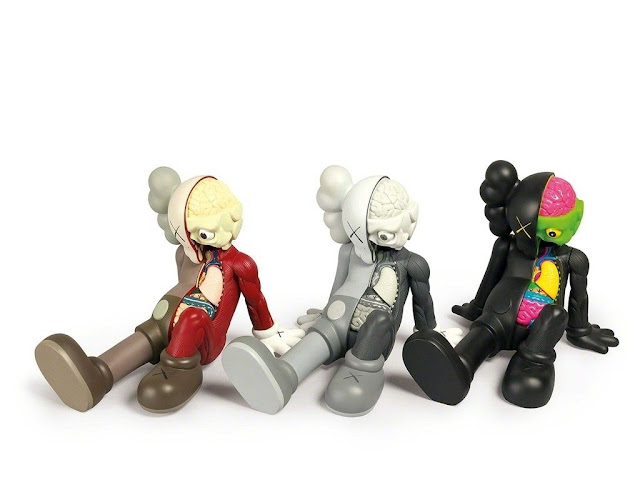 Inspired by what he had seen in Tokyo, and at toy conventions in Hong Kong, Budnitz founded Kidrobot in 2002. He sold the company in 2012 and, in 2018, founded another collectible toy company, Superplastic. Designer toys—often made from vinyl and referencing any number of pop culture motifs—skyrocketed in popularity at the turn of the millenium, with nascent toy companies, conventions, and websites generating excitement over a coterie of in-demand artists who were designing them. Designer toys have permeated the contemporary art market more recently as well, with the artist KAWS (real name Brian Donnelly) selling works in major evening auctions for prices in the millions.
KAWS is famous for his morbid-but-cute Mickey Mouse–inspired toys known as “Companions,” which he first introduced in 1999, and are produced in sizes ranging from hand-held to monumental. Demand for the works is such that in May 2017, when the MoMA Design Store released a series of 11-inch-tall vinyl versions of his coveted “Companions” for only $200 apiece, the flood of traffic crashed their website.
And while the art world has sometimes turned up its nose at KAWS’s work, in 2018, the art market embraced the artist with gusto, with works frequently selling at auction for several multiples of their expected values. In September, at the Phillips “New Now” sale, six of his 4-foot-tall “Companion” figures sold for two to four times their presale estimates, with a brown colorway topping the group at $150,000 with fees; two months later, at a Phillips evening sale, the colossal 23-foot-tall fiberglass Clean Slate (2014)—one of three in the world—broke the artist’s record when it blew past its presale estimate of $900,000 to $1.2 million, closing at over $1.9 million with fees. 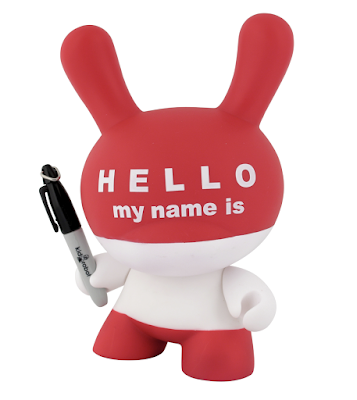 Kidrobot, “Hello My Name Is” Dunny, 2006. Courtesy of Paul Budnitz.

What makes KAWS so in-demand is not just the popularity of his “Companions,” but his output as a whole, according to Phillips’s head of evening sales, Amanda Lo Iacono. (On the same night that Clean Slate sold, his Fat Albert–inspired acrylic painting Untitled [FATAL GROUP], 2004, sold for over $2.7 million.) “I think it’s just the universality of not just his imagery, but also his democratic approach to artmaking,” Lo Iacono offered. “He works in a lot of different materials, he works in subject matter that’s pretty universal and known to pretty much anyone in the world who is engaged with visual culture.” Further, anyone can take home a KAWS—whether it’s the avid designer-toy collector scoring a $200 MoMA store edition, or the fine-art collector bidding in the millions for a large-scale “Companion.”
While KAWS has straddled a unique position between two worlds, he’s not the only creative force raising the cultural profile of designer toys. Budnitz’s famous designs for Kidrobot, created in collaboration with artist Tristan Eaton, were added to the Museum of Modern Art’s permanent collection in 2008. The toys are named Dunny and Munny—a bunny and a monkey, respectively—and Dunny has been customized by everyone from “Obey” giant Shepard Fairey to fashion icon Diane von Furstenberg to high-end glass company Steuben (the 2-foot-tall crystalline Dunny sold for $21,000). Meanwhile, Munny is a blank white design that anyone can draw or paint on, and thus, become the artist. Other toy designers like Tara McPherson and Frank Kozik have created toys that fetch thousands of dollars, such as McPherson’s “Lilitu” demon and Kozik’s Darth Vader helmet. The ever-prolific Japanese artist Takashi Murakami has also produced work in the vinyl toy space, with limited runs of his manga-inspired alter-ego Mr. DOB………………