THE SIMPSONS TAKE A TRIP TO PRADA MARFA

In the latest episode of The Simpsons, the family takes a trip to “Prada Marfa” and responds to the site-specific art project in signature ways. 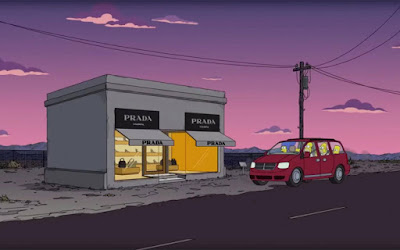 The remote artist colony and high-desert town of Marfa, Texas has long been an esoteric tourist destination — both for UFO hunters attempting to witness the “Marfa lights” and for offbeat art types. Marfa’s reputation as an unlikely art mecca was established by Donald Judd, who moved to Marfa in the 1970s and began to create permanent works there, eventually founding the nonprofit Judd Foundation that continues to give visitors access to the artist’s permanently installed living and working spaces in downtown Marfa. The town crops up occasionally in the cultural imagination — for example, as the setting for the excellent Amazon Prime adaptation of Chris Kraus’s equally excellent book, I Love Dick — but the biggest boost to tourism in recent years was the 2005 installation of Prada Marfa, a site-specific art project by Berlin-based art duo Elmgreen & Dragset. 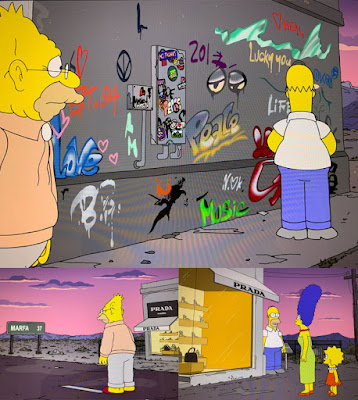 Screenshots of various scenes from the episode featuring Prada Marfa, including Homer relieving himself on a graffiti’d wall that appears to be on the side of the art installation. (screenshots by Hrag Vartanian/Hyperallergic)

Constructed with permission and donations from Miuccia Prada, the original installation featured actual brand-name purses and shoes; these were pilfered at one point, and subsequently replaced with security-tracked versions. Not being an actual retail location, the site maintains no open hours, and has suffered intermittent vandalizing throughout the years. The artists intended it to be left unmaintained until its eventual decomposition into the surrounding desert, as a high-contrast monument to desire and unattainability, and perhaps a reminder of the ultimate transience of even the most powerful social signifiers. The installation has been widely acclaimed by some critics, treated as a civic landmark by Marfa’s art community, and visited on fashion pilgrimages by celebrities like Beyoncé. But Prada Marfa can now mark its official passage from cult art to pop culture, as it received its highest-profile shout-out, to date: a visit from America’s dearest family, the Simpsons.

In an episode that aired on Sunday, January 6, and titled “Made About the Toy,” the Simpsons encounter Prada Marfa in the midst of a family road trip, and respond to the site with their signature approaches: Marge takes it for a sincere retail experience, Lisa knows it’s an art installation because, of course she does, and Homer goes to relieve himself behind it. (In Homer’s defense, that wouldn’t be the least trenchant take on contemporary art.)

This guest appearance marks an unexpected evolution of the work. When we consider that the cachet of high-end art and couture is ultimately about its exclusivity, perhaps achieving status recognizable to the average Simpsons viewer represents a slide into the mainstream — or, even worse, prêt-à-porter. But I prefer to take the opposite view, optimistically hoping that this shout-out from America’s lovable domestic avatars will drive Fox viewership to heretofore untapped levels of cultural erudition, or at least to see the far-flung edges of Texas as full of potential for something besides a racist border wall.