ST. MARK’S BASILICA IN VENICE HAS AGED “20 YEARS IN A DAY” AFTER MAJOR FLOODING

Last October’s flood submerged Venice under more than five feet of seawater. The city’s streets were a disaster, and they’re blaming the Italian government for it.
Zachary Small 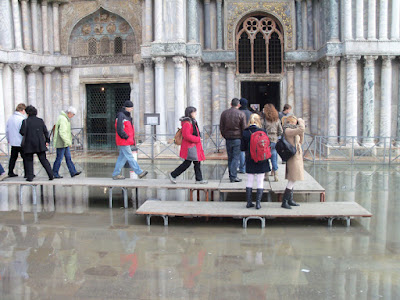 A perennial problem, this is the flooding at St. Mark’s in 2010, when the waters were even lower than the recent October flooding. (image courtesy lunamoth116’s Flickrstream)

The flood barriers may have never come to St. Mark’s Square in Venice as promised — but the tides did.

Last October, a rush of over five feet of seawater overtook nearly 75% of the Italian city’s square footage. Infrastructure deteriorated, and museums were forced to close in an effort to save their collections from the devastating effects of such salty water on paintings, sculpture, and woodwork.
Stranded in one of the city’s worst flood zones, St. Mark’s Basilica could not avoid disaster. Church administrators (aka procuratori) say that the building’s foyer was under 90 centimeters of water for almost 16 hours.
In a statement, they said: “We consider that the state, which promised to protect St. Mark’s and the entire city of Venice from flooding, should take responsibility for the immediate financing of the defense of the city, which is the heritage of the entire world.”
Shortly after the flood, senior procuratore Carlo Alberto Tesserin said in a statement that the church “had aged 20 years in one day” because of the damaging effects of flood water on the building’s thousand-year-old brick infrastructure. He said that seawater can get behind sheets of rare marble cladding to the brick walls, “which the salts in the water cause to crumble, with the damp rising up many meters and attacking the ancient mosaics in the vaults.”

The procuratori estimate that repairing the church and shoring up its defenses will cost an initial amount of €3 million (~$3.4 million), “with the basilica able to contribute €700,000 (~$794,000),” according to Pierpaolo Campostrini, an environmental scientist with the basilica.

This is only the fifth time in a millennia that St. Marks has flooded, but the second since 2000 when lagoon waters swept across the inlaid marble floor in front of the altar of the Madonna Nicopeia and into the baptistery and Zen chapel. Those same areas were completely submerged during the late October storm.

The Art Newspaper reports Campostrini as saying that “a plan to defend St Mark’s Square up to [the level of] 110 cm is required, but the project to do so, launched in 1998, has not been completed. A new, simpler initiative has been proposed to protect the basilica against a level of 88 cm above datum, which is scheduled for completion by the end of the year.”
Venice’s larger project to protect the city from the rising waters of its surrounding lagoon with mobile flood barriers was supposed to be finished by 2011. The initial budget for the project was €1.5 billion (~$1.7 billion), but has since ballooned to €5.5 billion (~$6.2 billion), according to a 2017 article in the Italian newspaper La Stampa. Now, the estimated start date for this initiative is 2021. And even then, St. Mark’s Square will still need extra protection as it falls 30 centimeters below the proposed flood measuring point of 110 centimeters.