Spring is said to be about renewal and the birth of fresh things, but three vocal highlights are coming from veteran performers. One, though, is still fairly new to New York: the sometime soprano, sometime mezzo-soprano Anna Caterina Antonacci.
While Ms. Antonacci, a passionate, fiercely idiosyncratic singer, has had a long and successful career in Europe, she has — shockingly — never sung in an opera in this city. Indeed, you can count her New York appearances on the fingers of one hand. But thanks to Lincoln Center and its artistic director, Jane Moss, she has begun to appear in regular concerts here over the past few years.
On March 5, she returns to Alice Tully Hall for an ambitious immersion in the French repertory, her recent passion, with the pianist Donald Sulzen, her longtime collaborator. Songs by Debussy, Duparc and Poulenc will be on offer, and very likely keen, but aficionados will be there for two things: Berlioz’s haunting “La Mort d’Ophélie” and Poulenc’s “La Voix Humaine,” a harrowing 40-minute monodrama in which the audience listens in on one side of a woman’s final telephone conversation with the lover who has abandoned her. 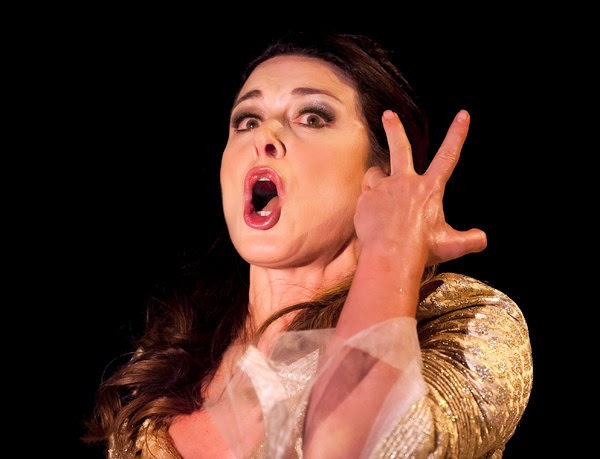 The soprano Dorothea Röschmann, best known to Metropolitan Opera audiences as a Mozartean, is particularly sensitive in the song repertory. She’ll be joined in recital at Carnegie Hall on April 22 by Mitsuko Uchida, that rare pianist who is even more eminent than the singer she’s accompanying. If each of these artists is special, then together they’re a must-hear. Ms. Uchida’s recent Schumann disc was spectacularly subtle, and she will join Ms. Röschmann in the composer’s Opus 39 “Liederkreis,” with its evocative piano writing, and “Frauenliebe und -leben.” Rounding out the program are Berg’s “Seven Early Songs.”
The following evening comes the radiant vocal quartet Anonymous 4, specialists in early music and much else. The group has announced that it plans to disband after next season but not before releasing its final album, “1865: Songs of Hope and Home From the American Civil War,” this spring, with songs from the time of that conflict, which ended 150 years ago.
Joined by Bruce Molsky on fiddle, banjo and guitar and appearing under the auspices of the invaluable series Music Before 1800 (which is celebrating its 40th season), Anonymous 4 performs the program at the Great Hall at Cooper Union, where Lincoln delivered a crucial antislavery speech in 1860.