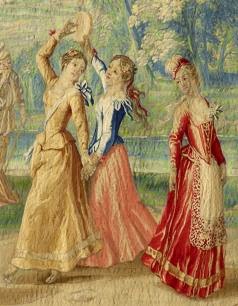 A masterpiece of comic fiction, Cervantes’s Don Quixote (fully titled The Ingenious Gentleman Don Quixote of La Mancha) enjoyed great popularity from the moment it was published, in two volumes, in 1605 and 1615. Reprints and translations spread across Europe, captivating the continental imagination with the escapades of the knight Don Quixote and his companion, Sancho Panza. The novel’s most celebrated episodes inspired a multitude of paintings, prints, and interiors. Most notably, Charles Coypel (1694−1752), painter to Louis XV, created a series of twenty-eight paintings (also called cartoons) to be woven into tapestries by the Gobelins manufactory in Paris. Twenty-seven were painted between 1714 and 1734, with the last scene realized just before Coypel’s death in 1751. In 2015 (the 400th anniversary of the publication of the second volume of Don Quixote), the Frick will bring together a complete series of Coypel’s scenes, which will be shown in the Oval Room and East Gallery.
The exhibition will include five of Coypel's original paintings, never before seen in New York, on loan from the Palais Impérial de Compiègne and the Musée Jacquemart-André, Paris. These will be joined by three Gobelins tapestry panels from the J. Paul Getty Museum and two Flemish tapestries inspired by Coypel from The Frick Collection, which have not been on view in more than ten years. The series is completed by eighteen prints and books from the Hispanic Society of America, New York.
An accompanying catalogue will explore Coypel’s role in illustrating Don Quixote and the circumstances of his designs becoming the most renowned pictorial interpretations of the novel. It will also map the production of Coypel’s Don Quixote tapestries, from cartoons and engravings to looms in Paris and Brussels. RIch education programs will include a series of lectures on eighteenth-century Flemish tapestries, Charles Coypel, and Don Quixote illustration over the centuries. Further programs will explore the history of the novel and its influence on artists working in a variety of media, including film, ballet, and opera. The exhibition is organized by the Frick’s Associate Curator of Decorative Arts, Charlotte Vignon.