Editor’s Note: Earlier this year when President Trump suggested that teachers take up arms at schools, 13-year-old cartoonist and activist Sasha Matthews came up with an impressive response. Her comic, titled “An NRA dream come true,” showed armed teachers and students, and a gun casually arranged with other school supplies. 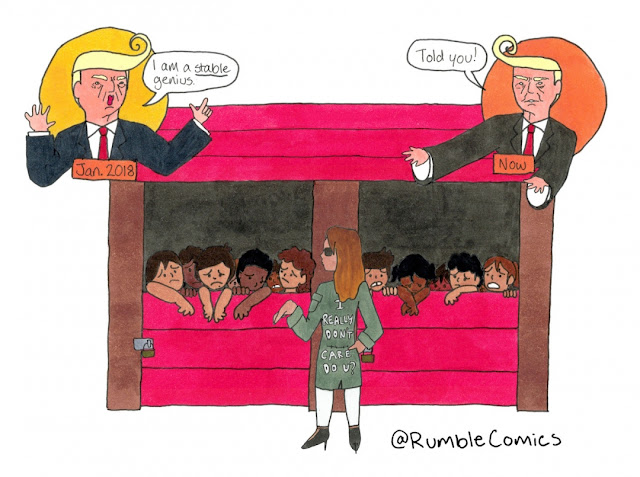 “After the election of Trump, I was afraid,” Matthews said during a speech at the ACLU Conference earlier this month in Washington, DC. “But instead of feeling like there was nothing I could do, I decided to do something about it.” She started a year-long fundraiser for the ACLU called Everyday Superheroes, in which she drew everyday people — trash pickers, scientists, artists, and activists — as superheroes. Every dollar she raised selling the drawings — a total of $11,635.83 — went toward the ACLU.

It comes as no surprise, then, that when Trump ordered authorities at the US-Mexico border to separate parents from their children — and then signed an executive order partially retreating from the decision, though his wife’s wardrobe choice betrayed the president’s indifference — Matthews had a response, and shared it with Hyperallergic.