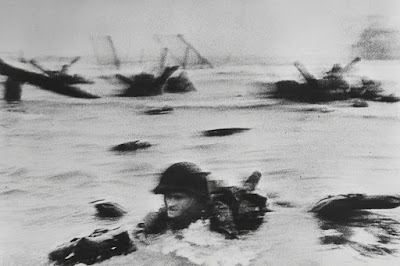 On June 6, 1944, more than 160,000 Allied soldiers stormed the beaches of Normandy. It was, and remains, the largest amphibious invasion in history, and struck a critical blow to the Nazis, hastening the end of World War II. The man who arguably let the public witness the horrors of that day—which resulted in 10,000 casualties—was Robert Capa, the sole photographer who captured the first wave incursion on Omaha Beach that morning. His photographs, including an iconic image of a soldier crawling through the surf, became enduring records of the plight of the American soldiers. And they were almost lost forever.
The Hungarian-born photojournalist, then 30 years old, had already garnered a reputation for his immediate, unflinching documentation of the Spanish Civil War and the Blitz. When Life magazine sent him to cover D-Day, the assignment proved to be the embodiment of his famous assertion: “If your pictures aren’t good enough, you’re not close enough.” Capa was one of four press photographers accredited to capture the first wave assaults.
The invasion began at 6:30 a.m., when the USS Samuel Chase’s ramp opened to the sea approximately 100 yards from the shoreline, and soldiers dutifully descended into a barrage of fire. Capa raised one of his three cameras and took his first photograph of the invasion, before promptly getting booted into the water by the boatswain. Alongside the military men of the 1st and 29th Infantry Divisions, Capa contended with exploding mortars, rough waters, and the rapid bullets of machine guns.
“It was still very early and very grey for good pictures, but the grey water and grey sky made the little men, dodging under the surrealistic designs of Hitler’s anti-invasion brain trust, very effective,” Capa recalled in his 1947 memoir, Slightly Out of Focus: The Legendary Photojournalist’s Illustrated Memoir of World War II. He took cover behind a steel pole, photographing madly and reloading, before moving to a defunct vehicle approximately 25 yards away from the beach.
Open Slideshow
“I just stayed behind my tank repeating a little sentence from my Spanish Civil War days, ‘Es una cosa muy seria. Es una cosa muy seria.’ This is a very serious business,” he wrote. “The tide was coming in now and the water reached the farewell letter to my family in my breast pocket. Behind the human cover of the last two guys, I reached the beach. I threw myself flat and my lips touched the earth of France. I had no desire to kiss it.”
Capa is said to have shot 106 photographs over the course of 90 minutes, the most iconic of which is now known as The Face in the Surf; it depicts a blurred soldier, water up to his shoulders, charging ahead through the war-torn sea. The man was later identified as 22-year-old Private First Class Huston “Hu” S. Riley, who made a 30-minute approach to the beach using a flotation device to keep himself above the tide. Capa immortalized the GI on film, and The Face is his only surviving image from the assault featuring the countenance of a soldier.
Its power lay in depicting a single face proceeding in spite of danger—a human anchor for the public to lock onto in the midst of an uncertain, terrifying landscape. Soon after the photograph was taken, PFC Riley was shot in the shoulder by a machine gun; Capa and a nearby buck sergeant helped him to safety. PFC Riley later recounted his inner monologue: “What the hell is this guy doing here? I can’t believe it. Here’s a cameraman on the shore.”
When Capa spotted an approaching vessel transporting the wounded, he took the opportunity to flee the beach and boarded it. En route to England, he helped medics lift stretchers rather than photograph his surroundings. Capa then passed off his film and a packet of information to a courier, noting to John G. Morris, the picture editor at Life, that “the action is in the four rolls of 35mm”—which he shot along with six rolls of medium format film. By the time the images arrived at Life’s London office, it was about 9 p.m. on June 7th, one day after the invasion, and Capa was on his way back to Normandy to resume photographing. 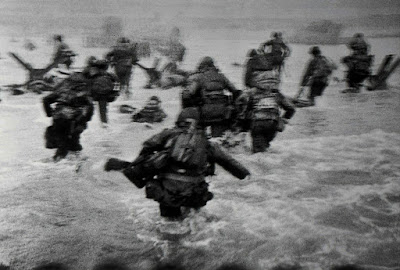 Morris, meanwhile, ordered the darkroom to develop Capa’s film immediately and quickly, leading a technician to make a panicked mistake. The door to the film-drying closet was left closed, cutting off ventilation and causing the film’s emulsion to melt and obscure nearly all of Capa’s photographs. The rolls were effectively blank, with the exception of 11 faint 35mm images—the blurred quality of which is attributed to the botched drying process, Capa’s shaking hands while shooting, and the reality of photographing in the fog of war. The surviving photographs were sent across the Atlantic the following morning, and a selection was printed in Life’s June 19th issue with the headline: “Beachheads of Normandy: The Fateful Battle For Europe is Joined by Sea and Air.”
“Life was the only eye witness that was really respected because there was no television,” Morris later explained to Time magazine. “It was Life that gave people the sense of how things really looked.” The magazine’s readership of approximately 5 million saw Capa’s images, and The Face in the Surf  became the face of D-Day’s mission to liberate Europe of Nazi rule. (Capa’s pictures even went on to inspire the 27-minute-long opening sequence of Steven Spielberg’s film Saving Private Ryan, of which the director once said: “I did everything I could to get June 6, 1944, to look like Bob Capa’s photographs.”) What D-Day looked like, in the minds of America and the world, was what Capa captured: brutal, heroic, feverish, macabre, and hard-fought, a scene of young men risking their lives in the horrific violence of war.
Haley Weiss
https://www.artsy.net/article/artsy-editorial-photographer-robert-capa-risked-capture-d-day-images-lost?utm_medium=email&utm_source=13495262-newsletter-editorial-daily-06-07-18&utm_campaign=editorial&utm_content=st-