THE UNEXPECTED, CREATIVE BENEFITS OF SHARING YOUR STUDIO 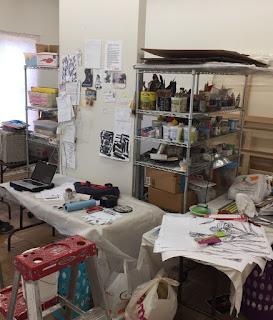 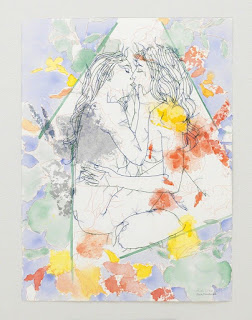 With the rise of trendy co-working spaces like The Wing and WeWork in recent years, the benefits of such environments have come to the fore. While these companies promise opportunities for networking, career advancement, and off-the-charts idea exchange (not to mention stylish digs), compelling research has found that the people frequenting co-working spaces—like freelancers, entrepreneurs, and remote employees—experience enhanced creativity.
But can the same creative benefits be felt when artists share a studio? You might think the answer is yes, but it’s not always the case. Shared studios can help enhance creativity, but only if the artists are frequently interacting, swapping resources, and exchanging feedback.
Dr. Thalia R. Goldstein, assistant professor of applied developmental psychology at George Mason University, has noted that under the right circumstances, the benefits of coworking spaces can also be felt by artists sharing a studio, by virtue of the fact that it fosters collaboration, as well as the “freedom and time to engage with others,” she said.
Multiple research findings back up this notion. At the University of Michigan’s Stephen M. Ross School of Business, the first phase of an ongoing study on co-working spaces (chaired by Dr. Gretchen Speitzer, Dr. Peter Bacevice, and Lyndon Garrett) found that the freedom to think and create independently, with self-defined opportunities to join in community, led to a heightened sense of achievement. (The study surveyed descriptions of several hundred co-working spaces in the U.S. and Europe and interviewed their members.)
To test out how this theory applies to art studios, we spoke to four different pairs of artists who have shared workspaces for various reasons in recent years. Though distinct in their careers, these artists found that their working arrangements made a profoundly positive impact on their respective practices.
While many artists who opt to split a studio make the decision primarily to save money in cities where rent is staggeringly high, others are drawn to the scenario for the stimulating influence that comes from working side by side with peers. That was the case for artists Reza Farkhondeh and Ghada Amer, who have been sharing a studio and an apartment on and off since the 1990s. Amer is well-known for her erotic embroideries on canvas, and some of her more successful works were conceived in an ongoing collaboration with Farkhondeh, a notable painter in his own right.  ……………………..