YOU CAN FINALLY LISTEN TO THE INSTRUMENTS AT THE METROPOLITAN MUSEUM

Now, for the first time, visitors are able to hear the sounds of the historical instruments on display in The Art of Music.
Claire Voon4 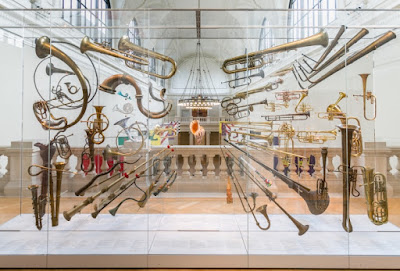 High-pitched and twittering, the sounds of pre-Columbian whistling jars might fool listeners into thinking they’re in the presence of tiny, exotic birds. Equally strange are the muffled drones of the wooden bullroarer from Papua New Guinea, which resemble the strange nocturnal hums of giraffes.

These two ancient instruments are among the remarkable artifacts on view in the Metropolitan Museum of Art’s encyclopedic musical instruments galleries, which recently reopened after nearly two years of restoration. Now, for the first time, visitors are able to hear their sounds as they observe them, as captured in recordings that play at listening kiosks as well as on a new audio guide, accessible via smartphones.
The audio collection represents some 40 instruments from across the world and time, from the pear-shaped, Chinese pipa to the world’s oldest surviving piano, which dates to 1720. Each recording is also available to enjoy online, through Soundcloud as well as Google’s Art & Culture platform.

“Musical instruments are a challenge in museums because when they are in showcases behind glass the one thing that’s missing is their main function,” Bradley Strauchen-Scherer, the museum’s associate curator of musical instruments, told Hyperallergic. “Paintings in the gallery behave roughly the same way as they would in a stately home or your salon, whereas musical instruments in a gallery are quite a separate thing. We were really keen to be able to bring that added dimension of sound to the visitor experience.”

The vast majority of these audio recordings were recorded on the actual instrument — a remarkable feat, considering that many are fragile and rare. Some, such as those that incorporate material like vegetable fiber and animal skin, are too delicate to be played, but “a generous handful” of the Met’s 5000 or so instruments are maintained in playing condition, Strauchen-Scherer said. The curatorial team typically considers what work is necessary to restore an instrument to functional use, then assesses the risks of damage and considers what knowledge can be gained from the experience of playing it.
To show off each object’s potential, the museum goes to great lengths to find the ideal musician for the job. One early 19th-century orchestral horn, for instance, requires a very specific skill to play. It has no valves but can toot the entirety of the chromatic scale, if its user is adept at covering its bell with their hand in different ways. To tease out its graceful, somber song, the museum reached out to the distinguished horn player R.J. Kelly.

“If we are going to play something where we are going to prepare an instrument, we want a record that does shed the most favorable light on the instrument,” Strauchen-Scherer said. “We want to be able to learn something from it. That involves working with players who really understand the particular instrument, the technique, and tonal aesthetic behind it.”

One particularly rare recording to experience is that of the Cristofori piano, named for its creator, the brilliant Bartolomeo Cristofori. As the world’s oldest surviving piano, it is a singular object, yet one that the museum was able to restore and invite virtuosos to sound out some of the first known piano compositions.

“I love watching peoples faces when they hear that instrument,” Strauchen-Scherer said. “It’s one that often really surprises people. The piano is an instrument we’re all familiar with, but in the beginning, it had such a different tonal quality and sonic properties to it. To actually hear that is really magical.”
Grand Piano by Bartolomeo Cristofori (1720)
Although only accessible in the galleries now, many of the recordings were created over the years as part of the department’s conservation process. Recently, the Met also began creating videos of musicians playing the instruments, often in spaces within the museum that place them in a broader historical context. This footage, too, is available online, giving viewers an opportunity to observe how these objects are handled when in use. 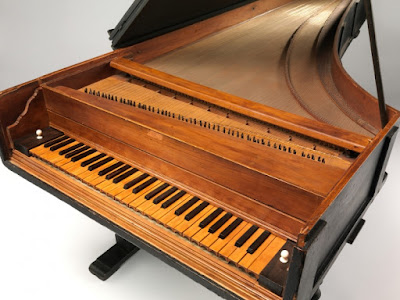 Forty instruments is but a small sampling of the museum’s musical collections, which is unparalleled, offering examples from six continents. This list will grow, thanks to an ongoing program to promote digital media throughout the institution. The Department of Musical Instruments plans to create new recordings every year, in attempt to satiate decades of visitors’s curiosity over intriguing lutes, violins, and pipes.

“We just thought the one thing people want to know, is gee, what does it sound like?” Strauchen-Scherer said. “We’ve really focused on just providing great quality recordings at a touch of a button. It really boils it down to the most essential elements, accessible to visitors around the world.”