The palace of Versailles and its gardens have attracted travelers ever since it was transformed under the direction of the Sun King, Louis XIV, from a simple hunting lodge into one of the most magnificent and public courts of Europe. French and foreign travelers, including royalty, ambassadors, artists, musicians, writers, scientists, grand tourists, and day-trippers, all flocked to the royal palace surrounded by its extensive formal gardens. Versailles was always a truly international setting, and not only drew visitors from Europe and America, but also hosted dignitaries from as far away as Thailand, India, and Tunisia. Their official receptions at Versailles and gift exchanges with the king were among the attractions widely recorded in tourists' diaries and court gazettes. 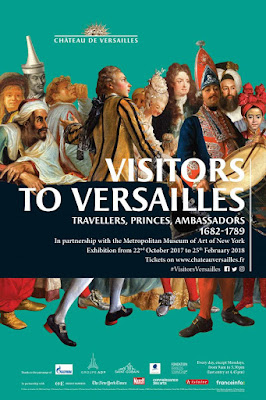 Bringing together works from The Met, the Château de Versailles, and over fifty lenders, this exhibition highlights the experiences of travelers from 1682, when Louis XIV moved his court to Versailles, to 1789, when the royal family was forced to leave the palace and return to Paris. Through paintings, portraits, furniture, tapestries, carpets, costumes, porcelain, sculpture, arms and armor, and guidebooks, the exhibition illustrates what visitors encountered at court, what kind of welcome and access to the palace they received, and, most importantly, what impressions, gifts, and souvenirs they took home with them.
#VisitorsToVersailles
Accompanied by a catalogue and Audio Experience, which brings to life the impressions of those who visited the palace and court in the seventeenth and eighteenth centuries.
With more than 7 million visitors per year in the XXIst Century, Versailles is one of the most visited historic sites in the world. The palace and gardens of Versailles have attracted visitors ever since the small hunting lodge built by Louis XIII was transformed by Louis XIV into one of the most stunning residences in Europe, open to everyone according to the King's will.

Cosmopolitan Versailles has welcomed French and foreign travellers, princes, ambassadors, artists, writers and philosophers, architects, scholars, tourists on the "Grand Tour" and day trippers from near and far. While some came to Versailles to see the King or win his favour, others were received officially by the Sovereign in the Palace, a place of intensive diplomatic activity.

Both public and private the palace of Versailles hosted the quotidian show that the King performed for his Cour and all his subjects. Visitors flocked from all over the world to this castlet that became the most accessible in Europe. The whole society without any distinction was invited to go to Versailles.