THE ART OBJECT AS INSTITUTIONAL CRITIQUE

The artists in Décor urge viewers to question the creator’s role in the management and presentation of art. 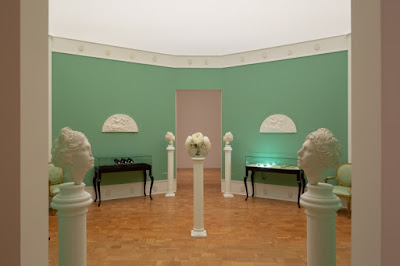 Installation view of Décor: Barbara Bloom, Andrea Fraser, Louise Lawler, April 28–July 15, 2018 at MOCA Pacific Design Center (all images courtesy of The Museum of Contemporary Art, Los Angeles, photos by Zak Kelley)
LOS ANGE
LES — With Décor at the MOCA Pacific Design Center, curator Rebecca Matalon brings together three artists who have been central to the development of institutional critique, Barbara Bloom, Andrea Fraser, and Louise Lawler. Beginning in the 1980s, these artists have spent their careers examining the role of the art institution in the relationship between artworks and viewers.

Centered on Bloom’s installation, The Reign of Narcissism (1988-89) — an ersatz neoclassical interior dedicated to a fictional version of the artist — the exhibition considers the intersection of interior decorating and museum displays. Assuming administrator-like roles, the artists urge viewers to question the creator’s role in the management and presentation of art.
Contributing three videos to the exhibition, Andrea Fraser re-poses a question that shook up the art world in the 1980s: what type of viewer does the museum produce? In her 1989 video series Museum Highlights: A Gallery Talk, Fraser takes on the invented persona of Jane Castleton, a docent of the Philadelphia Museum of Art. Touring through the museum’s collection, Fraser provides descriptions of the exhibited artworks that are often absurd or completely unrelated to the object she stands before. She lavishes exaggerated praise on items she encounters, demonstrating the disjunctions between speech and image.

Fraser’s script draws from diverse sources and addresses the museum’s establishment and biographical information about donors and integrating various quotes from scholars across all humanities disciplines. For example, she reads a quote from The Museum Fund, A Living Museum: Philadelphia’s Opportunity for Leadership in the Field of Art, stating that the Municipal Art Gallery:

[…] gives an opportunity for enjoying the highest privileges of wealth and leisure to all those people who have cultivated tastes but not the means of gratifying them.

Fraser endows her character with authority and credence by adopting the language of art historians and administrators. In appropriating this language, she transmits inspirational messages about the museum. 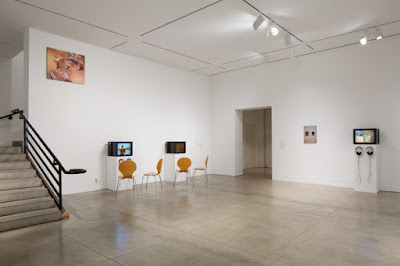 No longer a contemporary study of the structures of language within the art administration community, Museum Highlights has become a historical document that captures a moment in art history before the internet became an integral force in the democratization of art discourse (despite the rising cost of art and widening gap between art stars and working artists). Fraser’s work was received by a coterie of intellectual thinkers and artists who recognized the urgency of the questions she posed.

Fraser’s videos are juxtaposed with Louise Lawler’s photographs of artworks in situ, which were seminal to 1980s appropriation art. The photographs included in the show home in on the details of an object’s installation in the institution. In “Them” (1986-1987), two ancient sculptures rest in the corner of a blue room. Stripped of context that establishes them as untouchable and timeless masterpieces — apparently gathering dust in a corner — they come across as valueless pieces of discarded stone. In another work, “Pleasure More” (1997), the artist photographs a recreation of Andy Warhol’s installation of floating silver balloons, Silver Clouds (1966), in a New York gallery. Without reading the placard, viewers only see balloons, not the value attached to a work by an iconic 20th century artist……………..