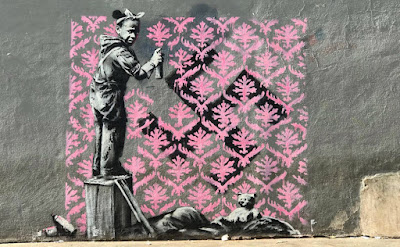 The six new murals include images referring to the migrant crisis and France’s attempts to ban hijabs.
Benjamin Sutton
Has the shadowy street artist Banksy hit the City of Light? A new series of six works that appeared around Paris last week has been widely attributed to the British artist, though they have not been confirmed as genuine through his own website or Instagram account.
According to one article, “experts told AFP that they look genuine,” though another story claiming the murals as Banksy originals has since been taken down. Meanwhile, street art blog and magazine Street Art News unequivocally attributed them to Banksy in a tweet and accompanying article. 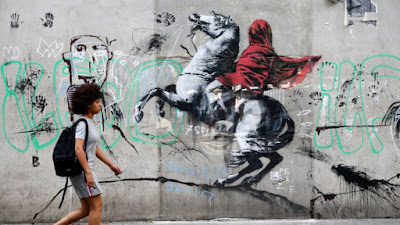 The rumored Banksy murals that have appeared in Paris thus far include three large works and three interventions featuring his trademark rats. Two of the large murals address France’s general climate of intolerance toward migrants and Muslims: one features a young girl spray-painting a pink decorative wallpaper pattern over a swastika with a sleeping bag and teddy bear at her feet; the other replicates the equestrian figure in Jacques-Louis David’s famous portrait of Napoleon crossing the Alps, but the rider in the mural is wearing a long, red headscarf, a reference to France’s attempts to ban hijabs. The mural depicting the girl painting over the swastika is on a wall in north Paris near an official refugee shelter that was shut down in March amid much controversy, as the AFP pointed out. The third large piece shows a man offering a dog a bone that he seems to have just cut from the dog’s leg with a large saw.
The three rat murals include a reference to the May 1968 uprisings, a rat riding the flying cork of a freshly popped champagne bottle, and a mischievous-looking rodent on the back of a large sign…………….
https://hyperallergic.com/448727/possible-banksy-murals-paris/?utm_medium=email&utm_campaign=June%2026%202018%20daily%20-%20Rumored%20New%20Banksy%20Murals%20Appear%20Around%20Paris&utm_content=June%2026%202018%20daily%20-%20Rumored%20New%20Banksy%20Murals%20Appear%20Around%20Paris+CID_64a6d2b427974323671071f51d5bba28&utm_source=HyperallergicNewsletter