Paul Kasmin Gallery is pleased to announce Watercolors, an exhibition of new  paintings by Walton Ford on view May 1 - June 21, 2014 at 293 Tenth Avenue, New York. Ford continues to explore the visual and narrative scope of traditional natural history painting with his monumental watercolors, chronicling encounters between human culture and the natural world. Several pieces in this exhibition will expand upon Ford's longstanding practice of incorporating written marginalia in his work, and feature for the first time musings penned by the artist from the perspective of his animal subjects.
As in his previous work, Ford draws upon his ongoing natural history research, mining literary sources, folklore and historical anecdotes for inspiration and imagery. The painting Rhyndacus (2014) is derived from an account in Aelian’s De Natura Animalium. This ancient Roman miscellany of the natural world briefly mentions an impossibly large, sixty-foot serpent inhabiting Phrygia (present day Turkey) that was said to magically lure prey into its open maw. Ford has vividly realized the imaginary snake in a strikingly detailed portrait towering nearly 10 feet tall. By depicting native Turkish flora and fauna, Ford conjures a monstrously majestic Ancient Roman vision of the East.
In another work, The Graf Zeppelin (2014), Ford engages the story of Susie, the first female gorilla brought to the United States. She arrived in New York in 1929, having crossed the Atlantic in a first class cabin aboard the German airship. Ford depicts Susie mid-flight and has written marginalia from her point of view, carefully channeling her observations and state of mind. 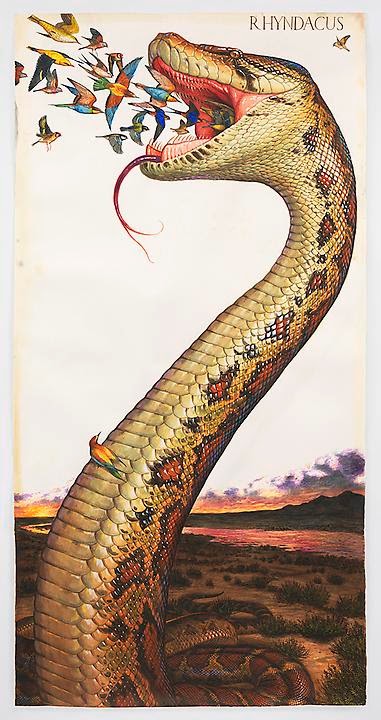 A third recent work, Windsor, May 1829 (2014), focuses on a formidable mandrill named “Happy Jerry” who lived in Edward Cross’s menagerie in London during the early nineteenth century. In his 1870 book Heads and Tales, Adam White describes Happy Jerry sitting at table, drinking port, smoking a clay pipe and dining with King George IV. Ford, again through meticulous research, recreates this unusual luncheon at Windsor. As he did with Susie, Ford incorporates Happy Jerry’s postprandial thoughts and sensations in the watercolor, writing from the primate’s point of view.
Walton Ford was born in Larchmont, New York in 1960, and currently lives and works in New York, NY. His work is included in numerous collections, including the Smithsonian American Art Museum and the Whitney Museum of American Art. A survey of Ford’s work was organized by the Brooklyn Museum in New York in 2006 and traveled to the San Antonio Museum of Art in Texas and the Norton Museum of Art in Florida in 2007.  Ford’s midcareer retrospective traveled from the Hamburger Bahnhof Museum Fur Gegenwart in Berlin (January 23–May 24, 2010), to the Albertina in Vienna (June 8–October 3rd, 2010), and to the Louisiana Museum of Modern Art in Denmark (November 12, 2010–March 6, 2011). Taschen books has issued three editions of his large-format monograph, Pancha Tantra.
The exhibition will coincide with Life in Death: The Still Lifes and Select Masterworks of Chaim Soutine at Paul Kasmin Gallery’s 515 West 27th Street location, on view April 24 – June 14, 2014.