AS BUBBLY AS A MIDNIGHT GLASS OF CHAMPAGNE. NEW YORK PHILHARMONIC AND DIANNE REEVES ON NEW YEAR’S EVE 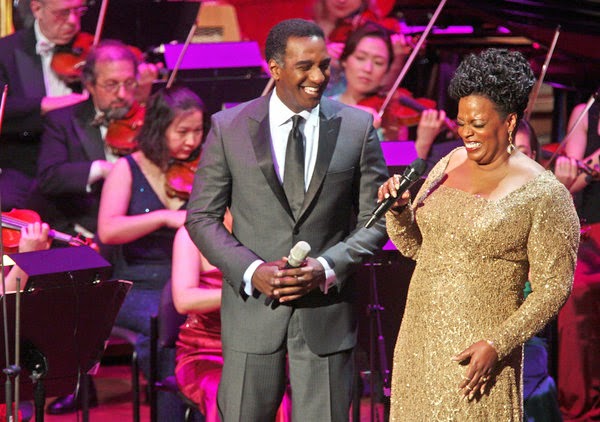 The New York Philharmonic’s New Year’s Eve concert at Avery Fisher Hall offered cleverness and good spirits aplenty. That much was all but guaranteed in a program celebrating the Gershwin brothers: the composer George and the lyricist Ira.
And there was more. The concert was conducted and hosted by the genial British maestro Bramwell Tovey, whose brand of humor, often lame but occasionally inspired, is familiar to Philharmonic audiences from the annual series Summertime Classics.
“Why a Brit,” Mr. Tovey asked at the outset, for such a quintessentially American program? In a labored response, he noted something to the effect that the concert was to be broadcast in the “Live From Lincoln Center” series on PBS, a network closely identified with “Downton Abbey.”
But he quickly improved on that, noting that Britain and the United States have much in common. “Even the languages have similarities,” he said.
Mr. Tovey shared the spotlight with two vocalists well suited to the style: Dianne Reeves, the jazz singer and the prime draw, to judge from the advance publicity, though not heard until after intermission; and Norm Lewis, now on Broadway in “The Phantom of the Opera” after a run as Porgy in “The Gershwins’ Porgy and Bess.”
Mr. Tovey demonstrated his versatility, deftly accompanying the personable Mr. Lewis in Mr. Tovey’s arrangements of two Gershwin songs at the piano. He also showed how his humor could play out musically, adding a delicious dissonance to the final statement of “The way you sing off key” in “They Can’t Take That Away From Me.”
Ms. Reeves pretty much took over the second half of the program, singing four songs with backing from her own group — Peter Martin, pianist; Reuben Rogers, bassist; Terri Lyne Carrington, drummer — and the orchestra. She proved an endless font of invention, bending melodies, harmonies and rhythms to new shapes without ever falsifying the spirit or mood of the original.
In “Fascinating Rhythm,” she acknowledged, she and her friend and fellow arranger Billy Childs “just went a little wild.” It was a delight: utterly transformed yet everywhere recognizable and convincing.
She injected arpeggios and other ornaments, large and small, with unfailing smoothness. She even managed to weave the identifications of the members of her group into “Love Is Here to Stay” with only the slightest breaks in rhythmic continuity.
But it was Mr. Lewis, who had the last word in the duet version of “ ’S Wonderful” that ended the program. Having followed Ms. Reeves through many runs of scat and melodic excursions, he simply gave up at the end, countering, “What she said.”
The orchestra managed its accompaniments with aplomb and with no sense of slumming. The principal players were mostly in place, many offering fine solo moments: most notably Sheryl Staples, the acting concertmaster.
The orchestra also took center stage in Gershwin instrumental medleys, the “Lullaby” for strings and — a timely way to ring out an eventful year — the “Cuban Overture.”