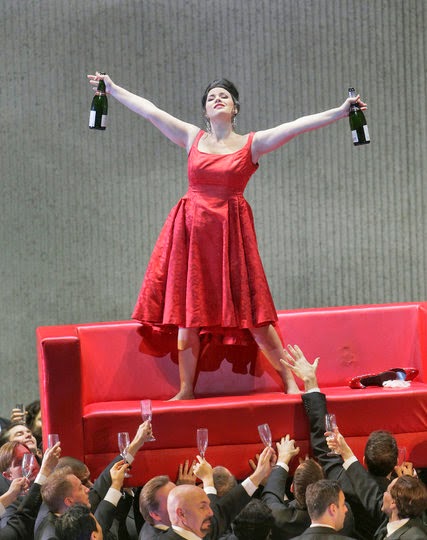 In Willy Decker’s production of Verdi’s “La Traviata,” a painted backdrop of jewel-tone flowers looms over the second act. As Violetta’s hopes and prospects dim, the blooms’ color seems to slowly leach away, leaving an ashen field of gray.
It’s a scenic coup, but on Wednesday at the Metropolitan Opera, where the staging first arrived in 2010, there was a soprano in the leading role who could match it. As Violetta agreed to abandon her lover, Alfredo, in the wrenching “Dite alla giovine,” Sonya Yoncheva, a rising star, let the color slip out of her voice, leaving a thread of tone as whitened and melancholy as the flowers.
The effect was all the more poignant because Ms. Yoncheva was otherwise a Violetta of such irrepressible vitality and sensuality. While she was soft-grained and tender as Mimi in Puccini’s “La Bohème” at the Met in November, here she was a woman more assured and headstrong.
In Act 2, when Violetta tells Alfredo’s father “Lui solo amar vogl’io” (“I’ll never love anyone but him”), Ms. Yoncheva drove “solo” deep into her chest voice, an invocation of understated yet implacable authority. Even in her third-act aria, “Addio del passato,” she coursed an undercurrent of bitterness through the gentle resignation.
Like her Mimi, Ms. Yoncheva’s Violetta was a creation full of searching details. “No one in the world loves you,” Alfredo tells her in Act 1, and in her reply — “Nessun?” (“No one?”) — she conveyed both self-protective wit and deep sadness.
As Alfredo started his buoyant Act 2 aria “De’ miei bollenti spiriti,” Ms. Yoncheva, hiding behind a sofa, stared forward as if she’d seen a ghost. (Even at the height of happiness, she perceives her fate.) Yet this was not a performance merely of moments: Ms. Yoncheva’s voice, strong and faintly smoky, ebbs and flows over phrases, scenes and acts. She plays the long game.
Her Alfredo, the tenor Francesco Demuro, sang with healthy tone and a kind of passionate modesty. As the elder Germont, the superb young baritone Quinn Kelsey was, if anything, in even better, richer voice than he was in the role late last month, but this time he had a subtler blend of callousness and guilt. Marco Armiliato conducted with an emphasis on restless energy.
An all-around stirring performance, but this was Violetta’s show. Ms. Yoncheva’s next role at the Met, in September, will be a big one: Desdemona in a new production of Verdi’s “Otello,” on opening night of the 2015-16 season. See you there.