MISBEHAVING MONK RECOUNTS HIS SINS. ‘THE ENCHANTED WANDERER,’ BY THE MARIINSKY THEATER, AT BAM 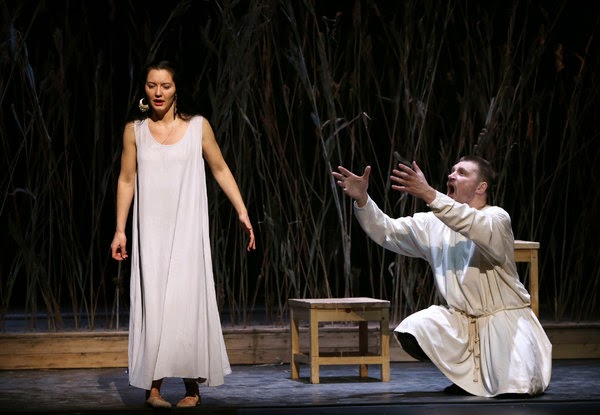 It’s always an event when the Russian star conductor Valery Gergiev comes to town. There’s the promise of polished music making and, these days, the guarantee of political protests by demonstrators calling attention to Mr. Gergiev’s ties to Russia’s president, Vladimir Putin; his reticence on anti-gay policies in Russia; and his support of that country’s annexation of Crimea. On Wednesday evening, a dozen or so demonstrators brandishing Ukrainian flags picketed the opening of the Mariinsky Theater’s residency at the Brooklyn Academy of Music. They might have reserved some of their ire for the program itself: Rodion Shchedrin’s “The Enchanted Wanderer” is a composition so lugubrious, clichéd and dull that Mr. Gergiev’s energetic championing of it might now be added to the rap sheet his detractors are compiling.
Mr. Shchedrin, 82, is an orchestrator of considerable skill with an eye for color, and the performance Mr. Gergiev drew from the wonderful Mariinsky orchestra and chorus held plenty of individual moments of beauty. The fine cast was led by the rich-voiced Ukrainian bass Oleg Sychov in the title role (substituting for Sergei Aleksashkin) and included the versatile high tenor Andrei Popov in five roles and the jewel-toned mezzo Kristina Kapustinskaya. But none of them could compensate for a work so musically trite and dramatically slack.
“The Enchanted Wanderer” was initially conceived as an “opera for the concert stage,” commissioned by Lorin Maazel and first performed by the New York Philharmonic in 2002. It is based on the eponymous 1873 novella by Nikolai Leskov, a picaresque, zigzagging tale of a man who is at birth promised to the church but destined to first endure decades of adventures and travails. Mr. Shchedrin, who wrote his own libretto, selects only a handful of these episodes and telescopes the story into a maudlin quest for redemption.
The opera opens with Ivan Flyagin, a novice, recollecting the path that led him to take orders. He once inadvertently killed a monk, and that man’s ghost now haunts him. He spent 10 years as a captive of Tatars, then entered the service of a prince. Vodka was a problem. He fell in love with a Gypsy girl, Grusha, but lost her to his employer, who seduced and then discarded her. When Grusha begs Ivan to kill her — suicide would jeopardize her soul — he throws her off a cliff.
The opera ends with Ivan being invested in monastic robes, flanked by the ghosts of the monk and Grusha. Throughout, a chorus offers prayers and commentaries.
Mr. Shchedrin’s adaptation excises all the shrewdness from Leskov’s original. In the novella, Ivan continues to stumble into trouble after he has taken vows and ends up no nearer to finding enlightenment than before. Leskov’s tall tale insists on the inexplicable but entertaining randomness of life. Literary historians compare him to Kleist and Twain; “The Enchanted Wanderer” has been likened to Voltaire’s “Candide.”
But there was precious little wit in the opera, nor in this production, by Alexei Stepanyuk, which featured primitive choreography by Dmitry Korneyev and a set, by Alexander Orlov, consisting of tall, dry reeds that snapped and crackled loudly.
The music is a grab bag of stock effects from Russian music: bumbling bassoons and oompah brass for rustic scenes, floating pianissimo choral lines draped underneath slow declamatory solos, a tangle of oboes (beautifully played) for the Russian shepherds. Religious nostalgia and folkloric earnestness cling to the score like heavy perfume.
Mr. Sychov coped admirably with the interminable scenes that have him reciting his tale in long, sustained phrases. Mr. Popov made the most of each of his characters, sounding convincingly ghostlike as the slain monk and weaselly as the hypnotist who persuades Ivan to wager all his master’s money on drink and Grusha.
As the Gypsy girl Grusha, Ms. Kapustinskaya sang with concentrated emotion. But her slender, gleaming tone did little to enliven a part that is musically anemic and blandly devoid of eroticism. “If you fall in love with me I won’t ask you why,” Grusha sings to Ivan, but this listener could not help but wonder.