By MICHAEL WHITEJAN.
LONDON — “Andrea Chénier” is one of those operas that most major companies do every 20 years or so: often enough for it to count as “repertory” but not for anyone to remember if it was worth the effort the last time around. And as the last Covent Garden staging was in fact 30 years ago — a generation past — it was a curious, inquisitive audience that came to Tuesday’s opening of a big new international production that is scheduled for Beijing and San Francisco after London.
If the piece didn’t impress, the Royal Opera’s packaging was good. Directed by David McVicar, conducted by Antonio Pappano, and with the tenor of the moment, Jonas Kaufmann, in the title role, this show (through Feb. 6) brings together serious, intelligent but heavy-hitting talents; and they all deliver handsomely. But they don’t have an easy time of it with the material on hand.
Composed in 1896 by Umberto Giordano — a lesser light of the so-called verismo school of Italian opera, which supposedly jettisoned fanciful subject matter in favor of gritty, truthful narratives — “Andrea Chénier” is veracious to the extent that its eponymous hero was a real-life poet who went to the guillotine during the French Revolution. All of which is portrayed in the piece, supported by copious quantities of quasi-historical detail, however leaden, unhelpful and wrong. 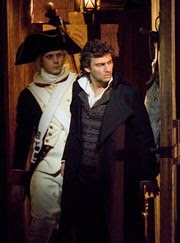 Jonas Kaufmann in the title role of ‘‘Andrea Chénier,’’ which is playing in London and then moves to Beijing and San Francisco. Credit Bill Cooper/ROH

Strip away the history and you’re left with a straightforward operatic love triangle: A wants B but has a rival C, who screws things up. It’s the story of “Aida,” the story of “Tosca.” In fact, parallels with “Tosca” run deep in that the rival here is a politically powerful Baron Scarpia-like figure who holds the hero’s life in check and comes close to bartering it for sex with the heroine.
That the libretti for “Andrea Chénier” and “Tosca” were both worked on by the same hand — that of Puccini’s regular collaborator Luigi Illica — is no surprise. A resulting problem is that the Giordano piece presents ideas and situations that feel so Puccini-like you can’t help wondering what Puccini would have done with them. Or feeling he’d have done it better.
“Chénier” may have its moments, including an arresting statement of the poet’s revolutionary idealism in Act I, a soul-searching monologue for the rival in Act III, and a grand duet as the poet and his lover Maddalena face the guillotine together in Act IV. But the opera doesn’t do enough to keep the energy, intensity and interest going in between. It coasts, without the flow of memorable melody or the dramatic craftsmanship of a first-rate verismo score.
Mr. Pappano did all he could on Tuesday night to sell this music from the pit. Dynamically alive to every possibility Giordano offered (and a few Giordano hadn’t thought of), the orchestral sound was rich and vivid. As with many a Pappano night at Covent Garden, it suggested a conductor in command of everything he undertakes, whatever period, style or provenance; and one who certainly knows how to limit the damage of disappointing art.
Mr. McVicar, the director, has a similarly all-embracing competence. Although his work has frightened a few horses in its time, it mostly comes with a respectfully clean, sharp-edged elegance that separates him from the messy radicals of opera staging. And this “Chénier” is a sharp, formal exercise in grandeur without clutter, using sets (by Robert Jones) that evoke 18th-century Paris in spare terms, and lighting (by Adam Silverman) that captures the crisp particularity of a Parisian sunrise with perfection.
As for singers, “Chénier” has a large number of small solo roles (which Covent Garden casts indifferently) but is otherwise a three-hander for the members of that love triangle. The villain Gérard is the most interesting in that he turns out not to be as villainous as you might expect: he is merely, as he says, a son of the Revolution who has become its slave. Self-awareness brings remorse; and the great monologue that steers his change of heart was probably the most compelling aspect of Tuesday’s performance, sung by the Serbian baritone Zeljko Lucic with dry but impactful substance.
By comparison, there isn’t much dimension or complexity in Maddalena; and Eva-Maria Westbroek — a Covent Garden favorite, destined always to be remembered as the opportunistic heroine of Mark-Anthony Turnage’s “Anna Nicole” — brought warmth and sympathy to the part, though not much vocal allure.
But ultimately it’s the title role that has to carry the piece. “Andrea Chénier” is very much a vehicle for a star tenor with some weight to the voice beside the mandatory top notes: a voice-type known as lirico spinto, combining “lyricism” with the ability to “push.” That the tenor at the 1896 premiere, Giuseppe Borgatti, went on to become the leading Italian Wagner-singer of his day explains much.
And that Jonas Kaufmann is a tenor who encompasses Italian and Wagnerian repertoire commends him as the right man for the job.
In many ways he is: on Tuesday night, his firm, darkly defined tone and sophisticated eloquence were wonderful. But it was lean, without the fleshy fullness or high-lying ping of a true Latin voice. And it was far too tasteful, robbed of the emotionally crucifying sobs and tears that are the guilty pleasures of late 19th-century Italian repertoire. This was verismo-lite: refined, attractive, sleek, but not what you could call the true experience.