The Kunstmuseum Basel is home to one of the largest and oldest public museum collections in Europe. In its unique history, it has assembled works from the early fifteenth century to the present.
The Kunstmuseum Basel houses the Galerie (Gallery) and the Kupferstichkabinett (Department of Prints and Drawings). The main focus is on paintings and drawings by artists active in the Upper Rhine region between 1400 and 1600 and of the 19th and 21st century.
The Kunstmuseum Basel possesses the world`s largest collection of works by the Holbein family. Further examples of Renaissance art include major pieces by  masters such as Konrad Witz, Martin Schongauer, Lucas Cranach the Elder and Matthias Grünewald. Most of these early treasures originally belonged to the collection of a Basel lawyer, Basilius Amerbach. Purchased by the city in 1661, they formed the core of the world`s first public municipal museum.
Paintings by Basel-born Arnold Böcklin feature among the 19th-century highlights. In the field of 20th-century art, the accent is on Cubism (Picasso, Braque, Léger), German Expressionism, Abstract Expressionism and American art since 1950. Contemporary art is exhibited at the Museum für Gegenwartskunst (Museum of Contemporary Art). 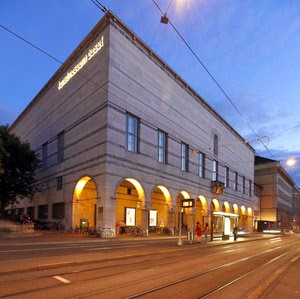 2015 will be a crucial and transformative year for the Kunstmuseum Basel. The new building designed by Christ & Gantenbein architects and the renovated main building will be inaugurated in 2016. For the necessary rehabilitation works, the Kunstmuseum Basel’s main building will close its doors for a year beginning in February 2015. Extensive selections from the holdings of the Öffentliche Kunstsammlung will be on display in Basel and Madrid during this period.
Invitation: Closing Event
Before the Kunstmuseum Basel’s main building closes its doors, we invite you to join us for a grand weekend celebrating our home on January 31 and February 1, 2015. The finissage concludes with a wine-and-cheese reception on Sunday starting at 4pm, accompanied by the experimental alpenhorn duo Stück für Stück Alphorn Eigenart. The museum will be open until 8pm on both days; admission is free.