CAMERON. SONGS FOR THE WITCH WOMAN 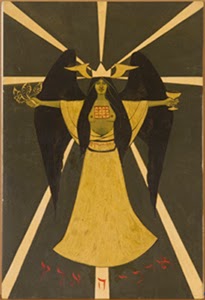 Cameron emerged in the mid-1940s as an artist, performer, poet, and occult practitioner in Los Angeles. Born in Belle Plaine, Iowa, Marjorie Cameron (who would reject her first name as an adult) arrived in Hollywood after serving in the navy during World War II. Settling first in Pasadena and working as a fashion illustrator, in 1946 she met her first husband, Jack Parsons, a rocket scientist and cofounder of the Jet Propulsion Laboratory who followed the esoteric mysticism of Aleister Crowley. The two soon married, their mystical bond transforming Cameron's life and art.

A visionary painter and unparalleled draftsman whose work evokes Latin American and European surrealism, Cameron rendered mythological figures with a singular attention to line and the idea of spiritual metamorphosis. Her philosophical explorations soon brought her into contact with Los Angeles's beatnik and avant-garde film circles, and the unorthodoxy and breadth of her interests made her a unique link between the city's flourishing spiritual and art worlds.

Over the following decades she dedicated herself to her art and mysticism while mentoring younger artists and poets such as Aya (Tarlow), Wallace Berman, George Herms, and David Meltzer. The first survey of Cameron's work since her passing in 1995, this exhibition reveals the seminal role she played within the development of Los Angeles's midcentury counterculture.